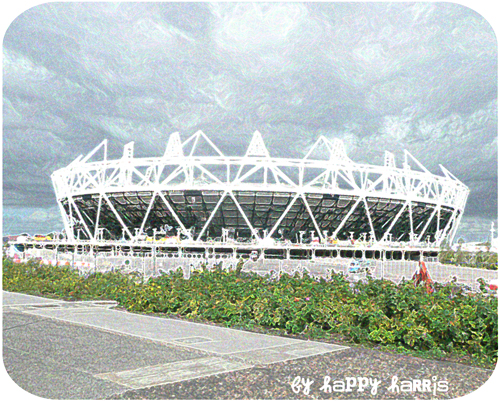 Yep! we are getting ready for the Olympics…and with less and a year to go, my Mum decided to arrange an outing to ‘The Olympic Park‘  I love going on her trips, she still arranges them at the young age of 81! she runs a WHSmiths retirement group in Chadwell Heath, Essex and she managed to fill a coach of 50 lovely retired ladies and gents!…oh and Me! lol! 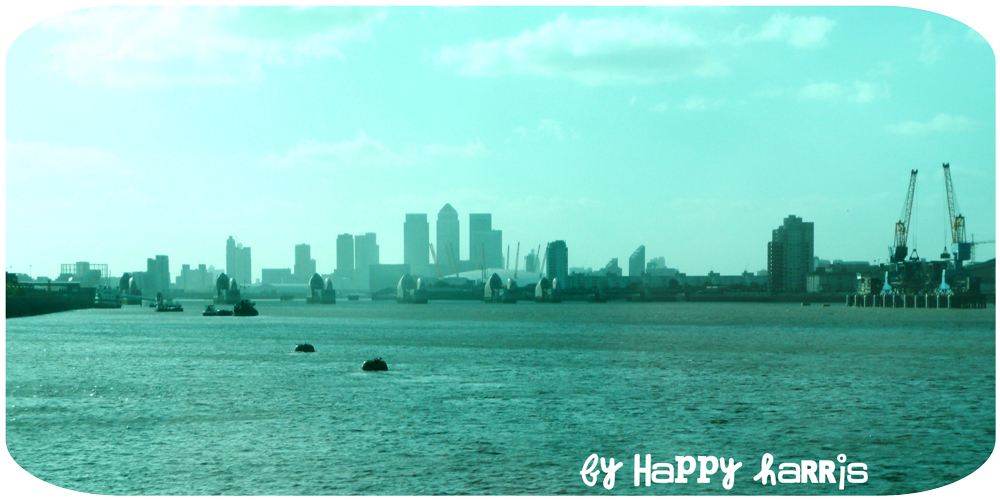 Most of these pictures were taken on the coach…I wanted to show you how the East End of London is changing in the preparation of these games. 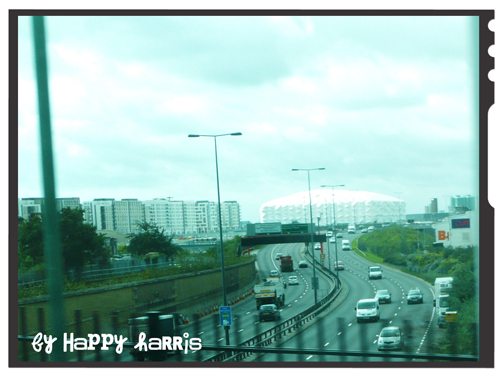 Parts of it are expected to be reused or relocated elsewhere in the UK….thus making more use of it…which I think is quite cool! 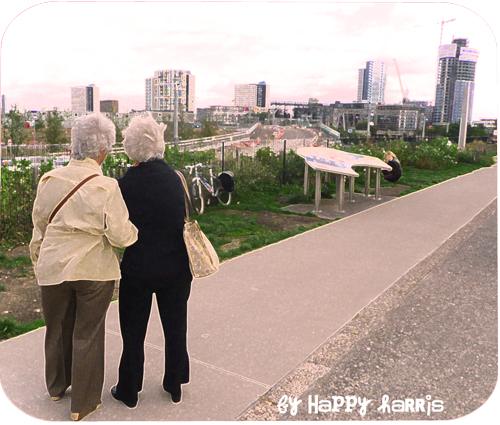 This piccie is of two of my Mums friend’s looking out over a VERY changed skyline in Stratford…This is situated at the Viewtube, which anyone can visit, by a short walk from the old High Street… 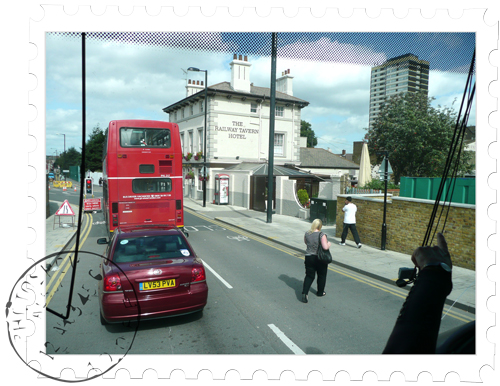 We had a lovely lunch here at the Railway Tavern Hotel…This pub has been run by the same family for 100 years…isnt that brilliant!…and they are still going strong! At first they were worried about the effect that all the work for the Park would ruin their trade, but their worries were short lived as now they are on the tour schedules and are kept busy with providing lovely roast beef lunches…Yum Yum!..

Also the block of flats behind the pub are council run retirement homes…their view of the Olympic Park is amazing and the top 3 flats have already arranged a deal to move out of their homes for the Olympics…for a very pricely sum! 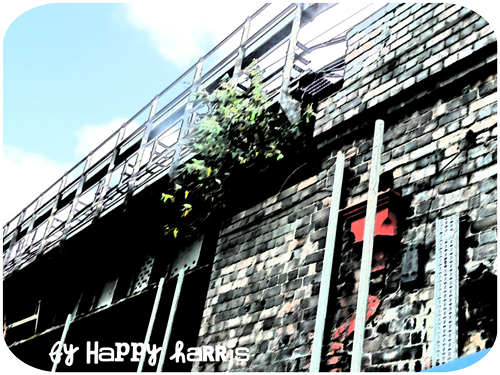 I love taking pictures of old buildings…the old aged architecture is sublime..so as you can imagine, I couldn’t resist snapping this old railway bridge, especially as in the ‘good ole days’ when we deserved the ‘Great’ in Great Britain and we were one of the leaders in manufacturing…the East End was famous for its steel works and used to produce the railway tracks and trains….these days and what with foreign imports, many business are going under…its such a shame….so hopefully this Olympic Park will bring alot of well deserved wealth to the East End…. 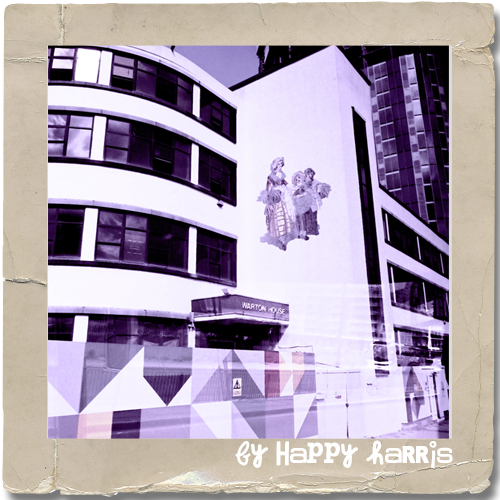 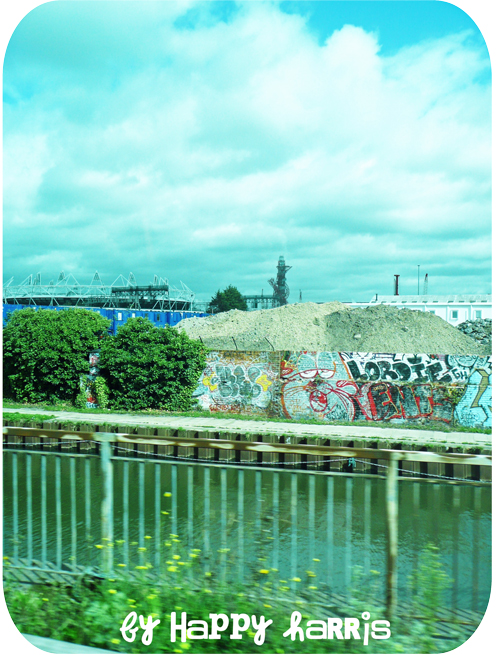 What a contrast…Graffiti, rubble and new beginnings…
The statium is pictured on the left. 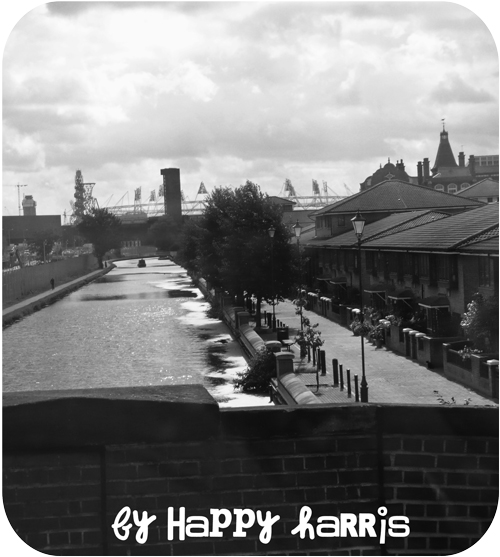 A lovely view of the River Lea and the Olympic Park at what seems the end of it….Somewhere over the rainbow eh! 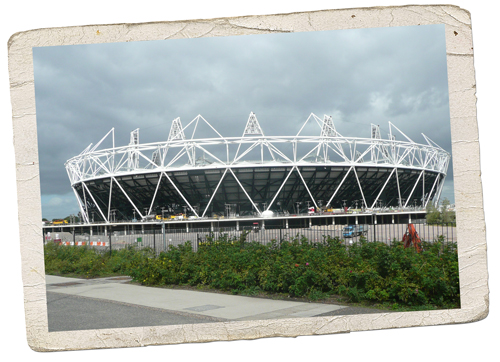 The Olympic stadium…which is still undergoing work, but as you can see
the majority of it is up!…at the moment the seating is for 60,000
peeps, but when the games are over, the top section is coming off to
reduce the size to a more comfortable 25,000 peeps…and more in keeping
with a West Ham football club crowd…Yep West Ham footie Club have put in a bid to buy the Stadium after the games are over!…

Hmm! I wonder if Leyton Orient will put in a bid too! it only seems fair 😉 x 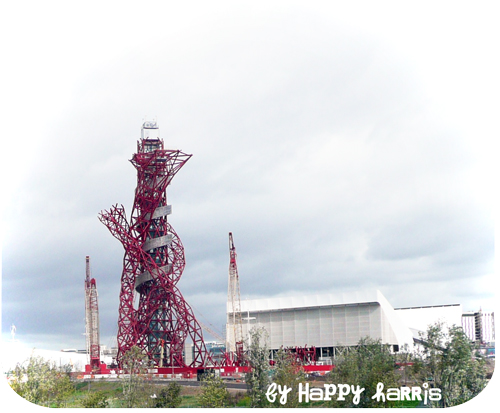 Above is the state of the art Hubble Bubble, red, meccano looking, nicknamed ‘Eyeful Tower’  construction, it will have many view points and a restaurant situated at the top…it looks totally amazing at the moment, without what it is going to look like when it is finished!  It was designed by the Turner Prize winning artist Anish Kapoor…it will stand at 377ft which will stand more than twice as tall as Nelson’s column!

The white building to the right is The Aquatics Center it was designed by Pritzker Prize winning architect Zaha Hadid in 2004 before London won the bid. The centre is located in the Olympic Park at Stratford in east London. With its distinctive architecture and curved roof, it will be the first venue visitors see upon entering the Olympic Park. 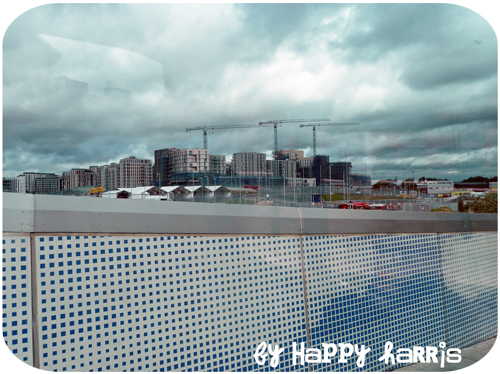 Above is the Olympic Village…These apartments currently have 4 and 5 bedrooms with no kitchens…they have been built to hold the athletes..going with the idea that, they will be eating together with their team captains, as they are all on strict diets, so really these apartments are just hotel rooms, keeping them all close to the events that they will be participating in…Oh yes it has all been well thought out…I was quite suprised!

When the Games are over they will be converted back to 3 and 4 bedroom apartments…goodness knows how much they will be…but the whole area is undergoing a major rejuvenation project, building more affordable accomodation for younger people…apparently this area alone holds a high percentage of under 30 year olds. 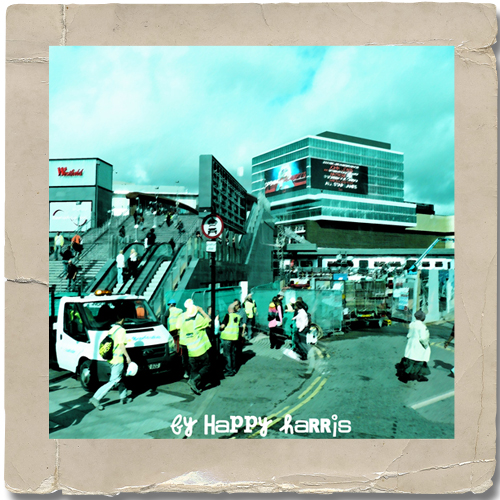 We arrived the day before Westfield Shopping Center was to be opened and this was all the Kerfuffle happening outside…it is a state of the art arcitectural design and you will have to travel through it to get to the stadium! CLEVER!

Is it a wonder that John Lewis, Marks and Spencers and many many designer shops are there…all ready to bag a profit as Westfield (Stratford) is now the largest shopping center in Europe! 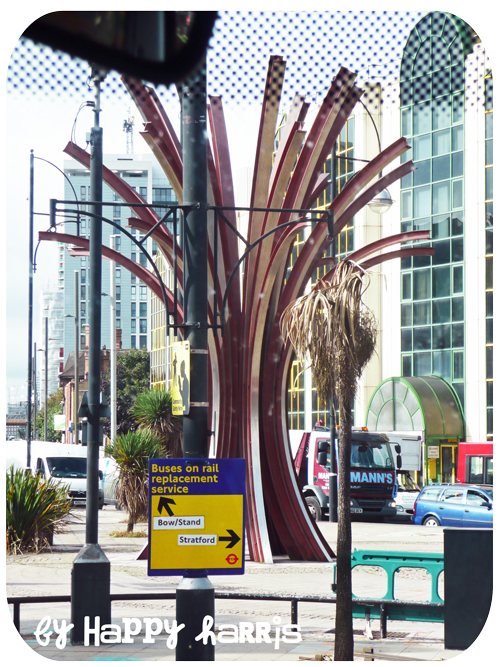 Above is the Railway Tree it stands at the
junction of the Broadway and Great Eastern Road, Stratford, E15. This
structure is aligned by the compass points. The steel girders are shaped
like railway lines and are intended to remind us of the area’s past
connection with industry and the railways.

I hope you enjoyed the tour as much as we did 😉