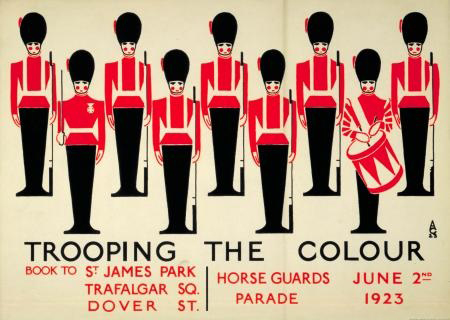 The custom of Trooping the Colour dates back to the time of Charles II in the 17th. Century when the Colours of a regiment were used as a rallying point in battle and were therefore trooped in front of the soldiers every day to make sure that every man could recognise those of his own regiment. In London, the Foot Guards used to do thisas part of their daily Guard Mounting on Horse Guards and the ceremonial of the modern Trooping the Colour parade is along similar lines. The first traceable mention of The Sovereign’s Birthday being ‘kept’ by the Grenadier Guards is in 1748 and again, after George III became King in 1760, it was ordered that parades should mark the King’s Birthday. From the accesssion of George IV they became, with a few exceptions and notably the two World Wars, an annual event.

This impressive display of pageantry is now held on the occasion of the Queen’s Official Birthday. It takes place in June each year (TODAY) to celebrate the official Birthday of the Sovereign and is carried out by her personal troops, the Household Division, on Horse Guards Parade, with the Queen herself attending and taking the salute.  Since 1987, The Queen has attended in a carriage rather than riding, which she did before that on 36 occasions, riding side-saddle and wearing the uniform of the regiment whose Colour was being trooped. The regiments take their turn for this honour in rotation as operational commitments permit.

Over 1400 officers and men are on parade, together with two hundred horses; over four hundred musicians from ten bands and corps of drums march and play as one. Some 113 words of command are given by the Officer in Command of the Parade. The parade route extends from Buckingham Palace along The Mall to Horse Guards Parade, Whitehall and back again.

Precisely as the clock on the Horse Guards Building strikes eleven, the Royal Procession arrives and The Queen takes the Royal Salute. The parade begins with the Inspection, The Queen driving slowly down the ranks of all eight Guards and then past the Household Cavalry. After the event, the Royal Family gathers on the balcony of Buckingham Palace to watch an RAF flypast.