Well gals, we have been out and about this week starting with a trip to London on Saturday (gone), yes it was dull and gloomy and we were bored! so what better a way than to spend the afternoon, with a trip ‘up West’! 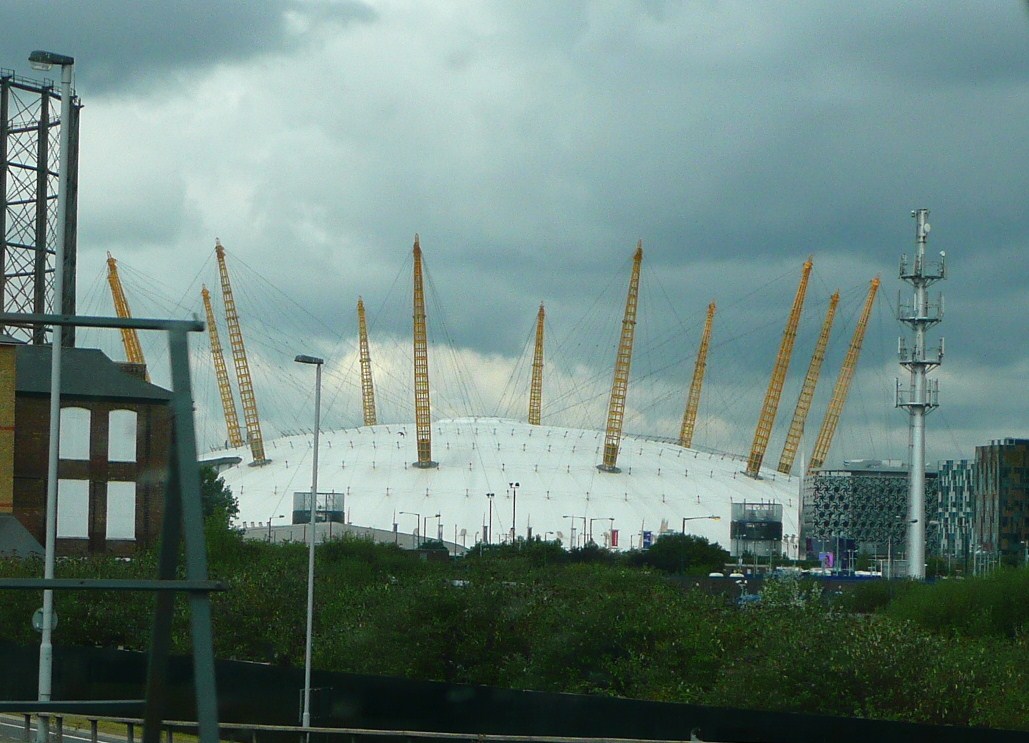 As we approached the Blackwall Tunnel I was able to get a piccy of the Millenium Dome!…Goodness me! look at that sky!…still you get used to that living in Blighty! 😀 …and look at the view of the Docklands over on the left…phew there sure is a lot of buildings going up and a general ‘doing up’ of old buildings! a sprucing up of the East End…getting ready for the Olympics! 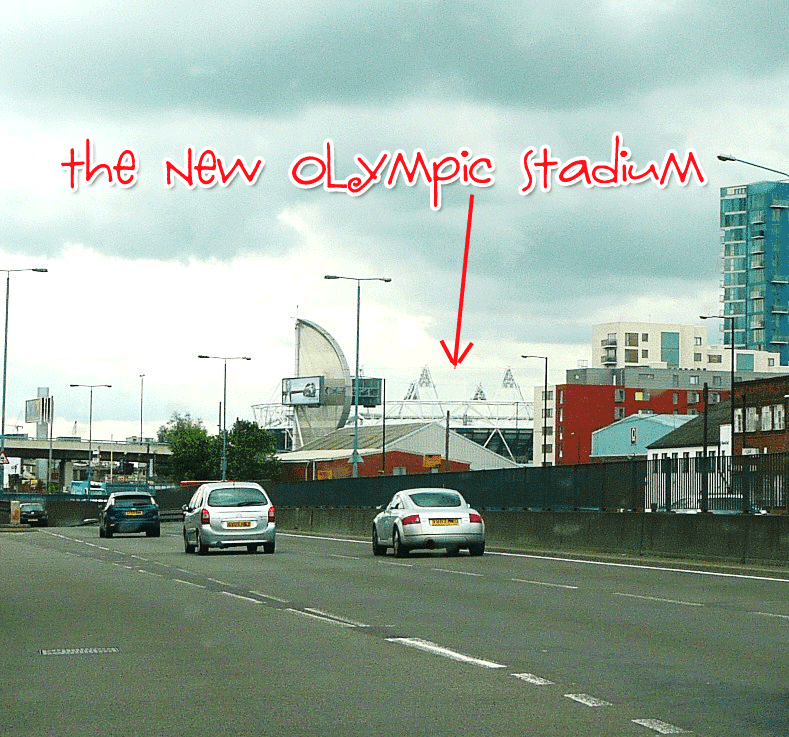 Thing is though…we cannot believe that the Government have agreed to put the new Olympic Stadium in the middle of the East End  where there is no room! let alone room for traffic to flow! apparently they are thinking of marking lanes especially for the olympics traffic only! OMG!considering it holds one of the biggest traffic jams in the whole of London anyway! Oh well I pray that it all works out! as we are spending millions on thisproject and I sooo want it to be cool! 🙂 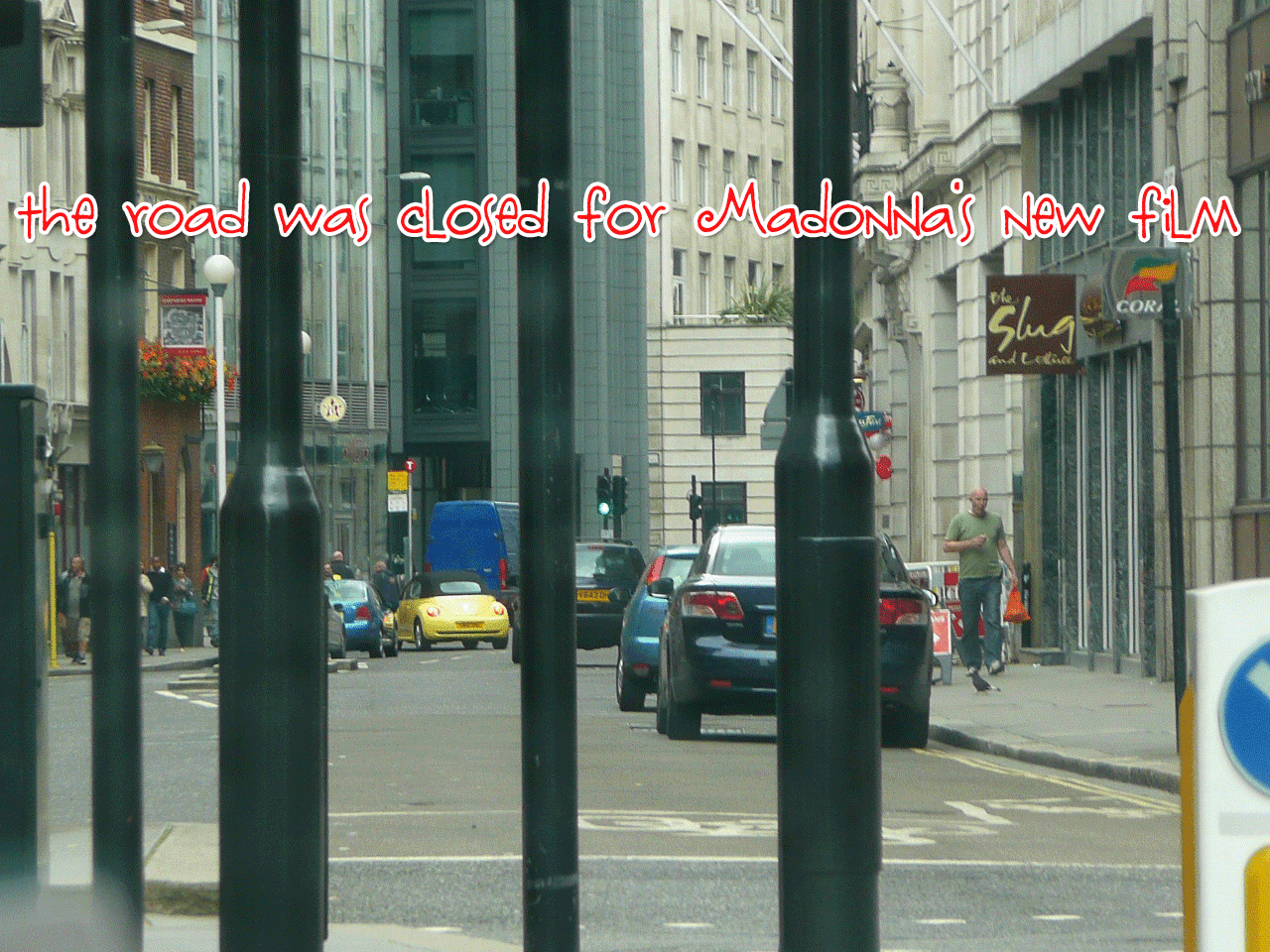 Then we drove past a Street where Madonna‘s was shooting her new film…Now as you can see this could be any old street! because my picture of this situ. is not that great! so you will just have to take my word for it…. I have totally missed the sign that says ‘filming in progress’! but it looks like a yellow Beetle could be featured 🙂 so we will have to look out for that when the film comes out! 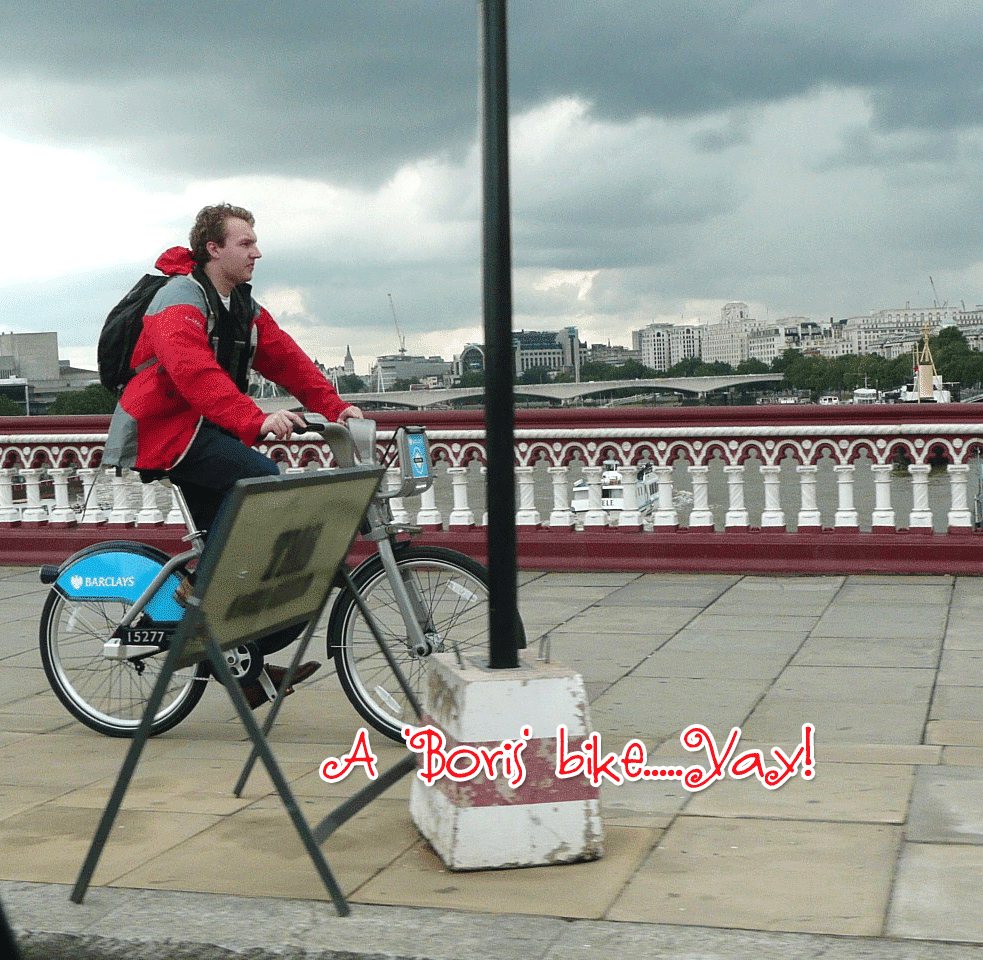 …Taking in the sites…we spotted a guy on a newly launched ‘ Boris ‘ bike ….so I had to take a picture! thing is taking snaps from the passenger seat in the car doesn’t quite produce David Bailey pictures! LOL! and also gets you funny looks!…but hey I was enjoying myself…even though Fred and Rosie were rolling there eyes at every piccy I was taking ! 😀

Will we miss the rain! doesn’t look like it! 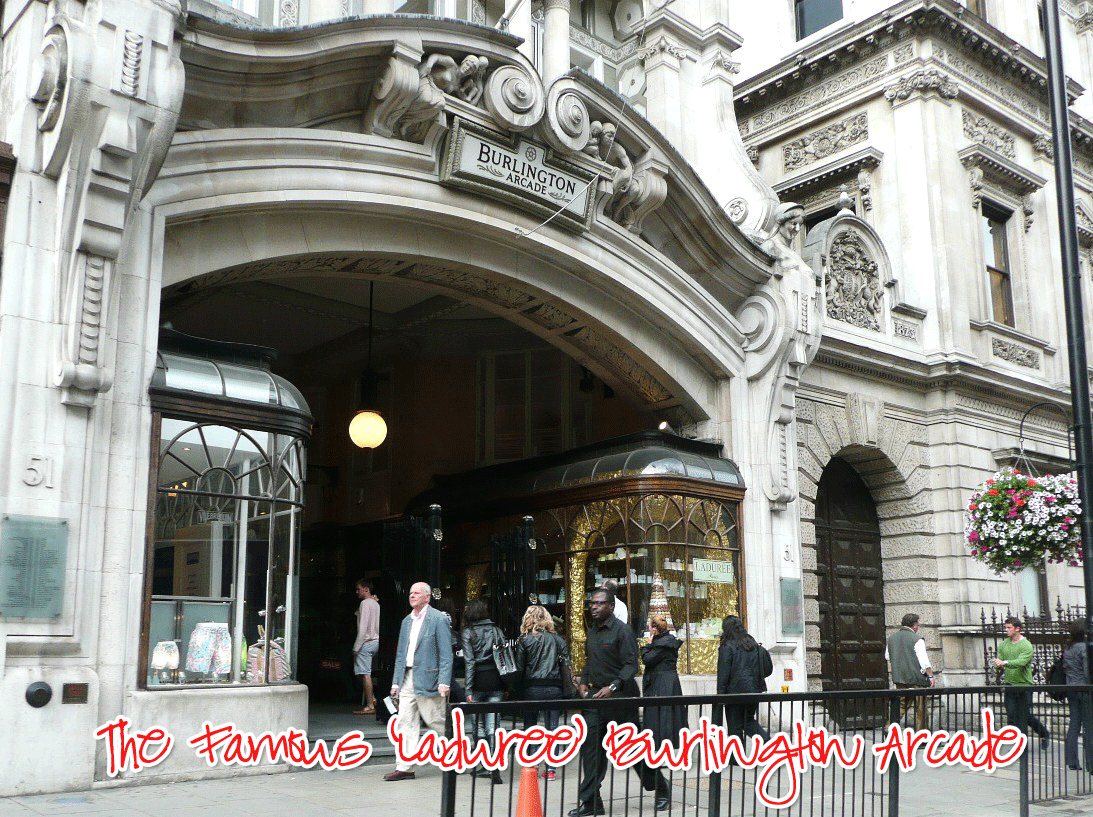 …And so we arrived in Piccadilly, parked the car and had a slow walk past The Ritz….( my mum went there a couple of weeks ago with her partner, they had afternoon tea to celebrate her 80th birthday and were charged £28 for a whiskey and Lemonade and a G and T! phew! :D)….and down the High Street, past The Burlington Arcade and Laduree (above) to Fortnum and Mason….Rosie and I needed the little girls room and a lady attendant went into each cubicle and cleaned the toilet seat, before ushering us in! Oh how the other half live eh! 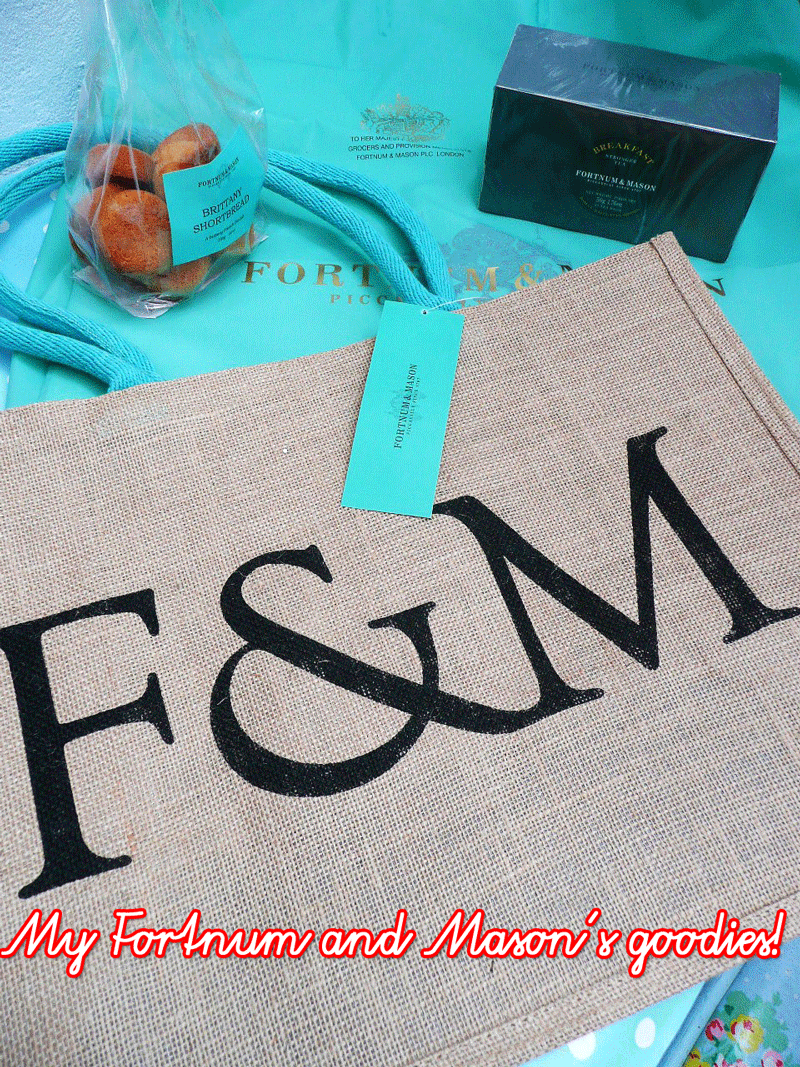 There we purchased some lovely yummy shortbread, some Breakfast tea and a fab everlasting jute bag, that I think I will have to go back for some more, because they will make perfect Christmas pressies and at only £3.95 each they are a total bargain! (you get a nice post plastic bag to put it in too! hey I know it defeats the object! but a nice pressie all the same! 😀 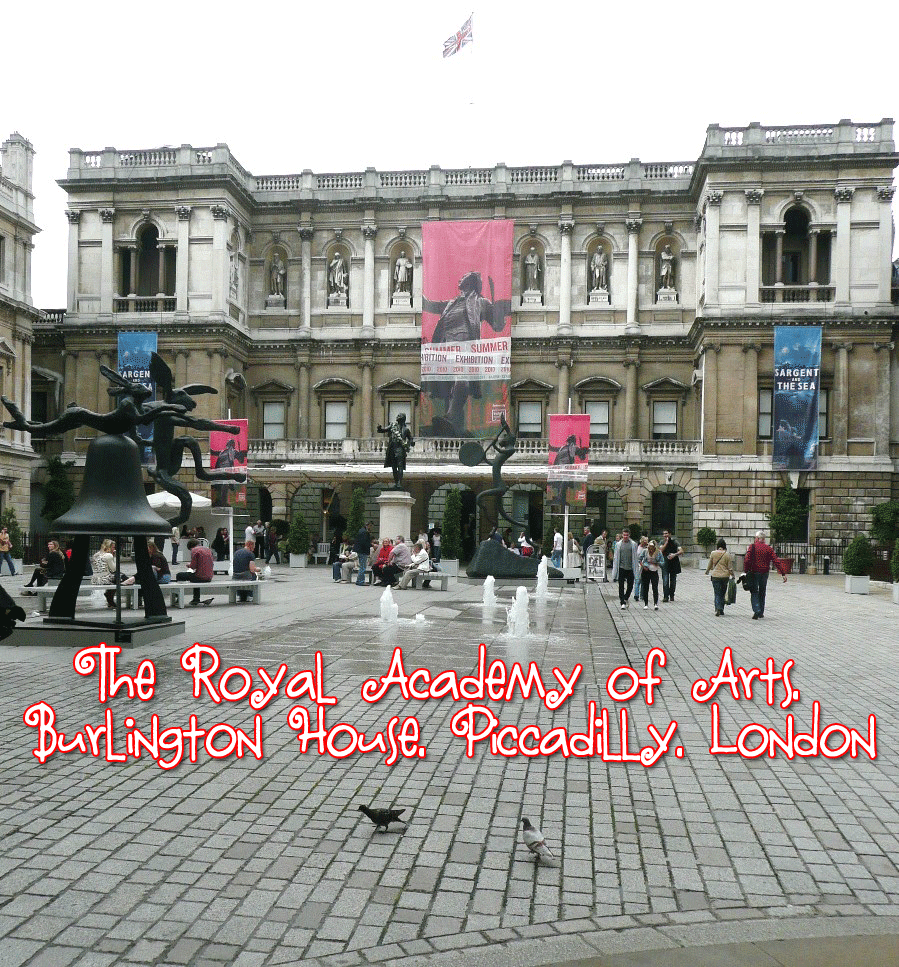 We had a little meander into the Royal Academy of Artsand soooo wanted to jump in the water fountains….but it was sooo ‘well to do’ there, that we thought we had better not! 🙂 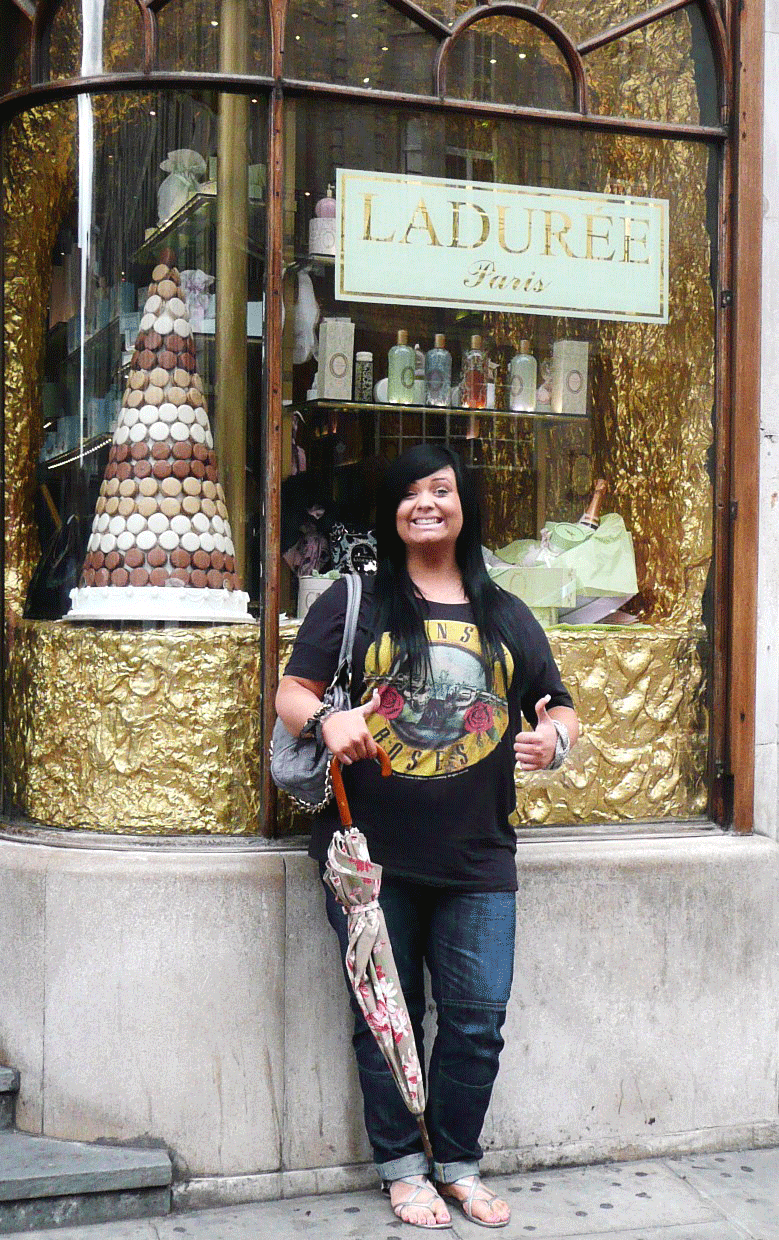 Then on our slow walk back to the car….we decided that we couldn’t leave before visiting Laduree’s world famous Macaroons! Yep! move over cupcakes! Macaroons are here to stay! mind you Laduree have been making macaroons since 1862 and yes they are Delicious! and Oh the decadence of the interior!  Its the tiniest shop ever! and is decorated like a cave painted in gold lurex! stacked high with pretty coloured macaroons….and oh the sweet smell! Yum Yum Yum! 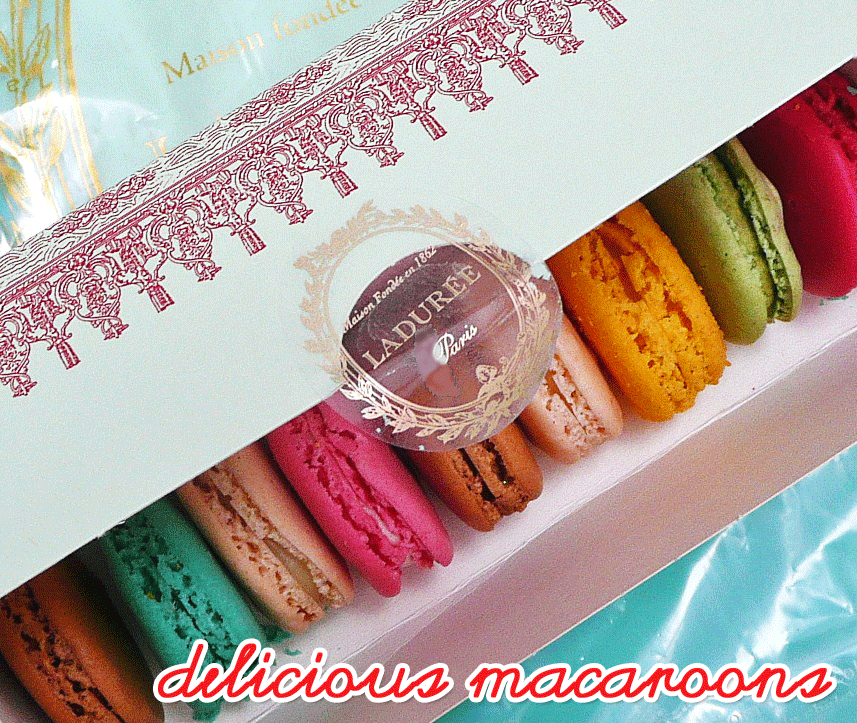 These are the colours that we choose, although now having tasted them I wouldn’t go for the bright colours…although they look yummy! those bright colours are soooo misleading! mint – tasted like mouthwash, Urrr! Rose tasted like Turkish delight! Double Urrrr! our favs were, Coffee, Coconut and Vanilla! the box won’t look as good as these! but at £1.50 a smaller than small cake, I think we will have to forfeit the pretty colours next time 🙂 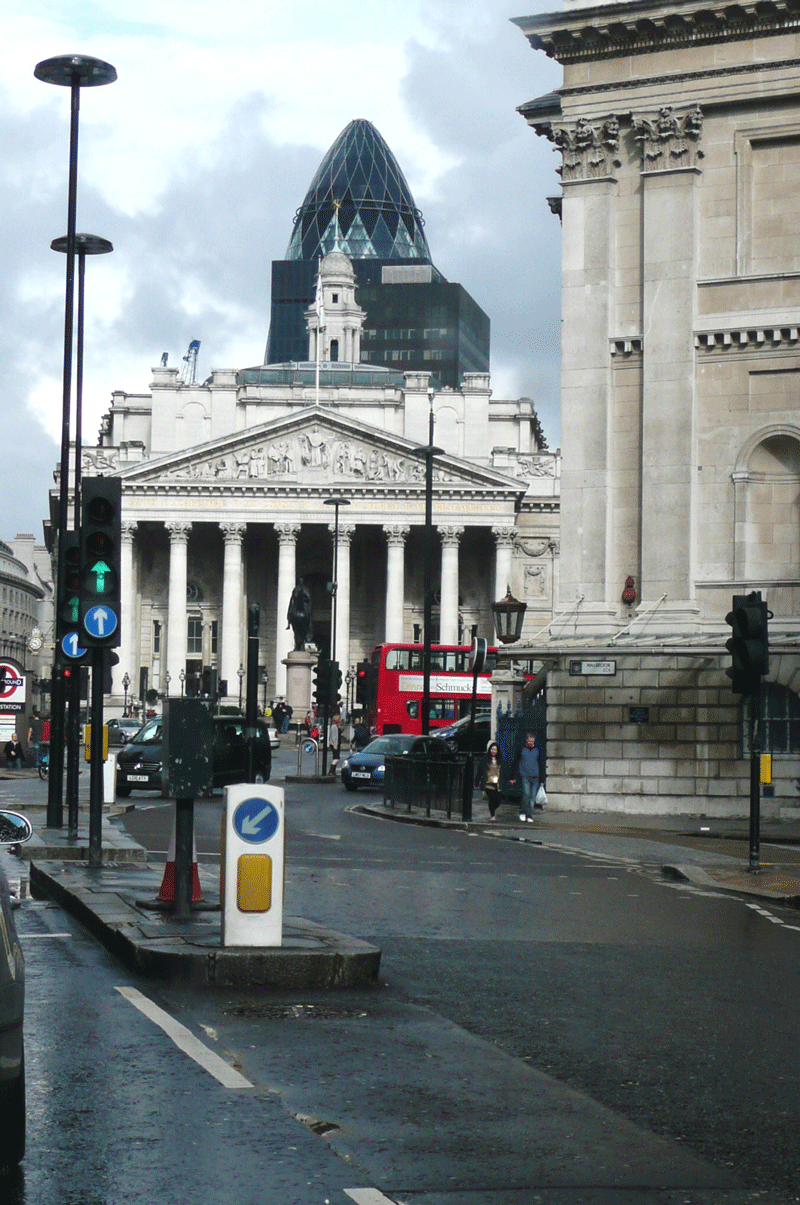 We had a lovely day….funny how it always revolves around food! LOL! and I was soooo privilidged to be holding the umbrella all through the day! until it started to rain, when Rosie decided to hold it and she managed to stay perfectly dry and I got satuated! Now how did that happen! KIDS eh! 😉