Last year not much happened in our garden really…I new that I wanted to landscape it eventually, but Freddy was still in his bed in the Living Room and the work on the lift and the wet room wasn’t going to start until January 2017. 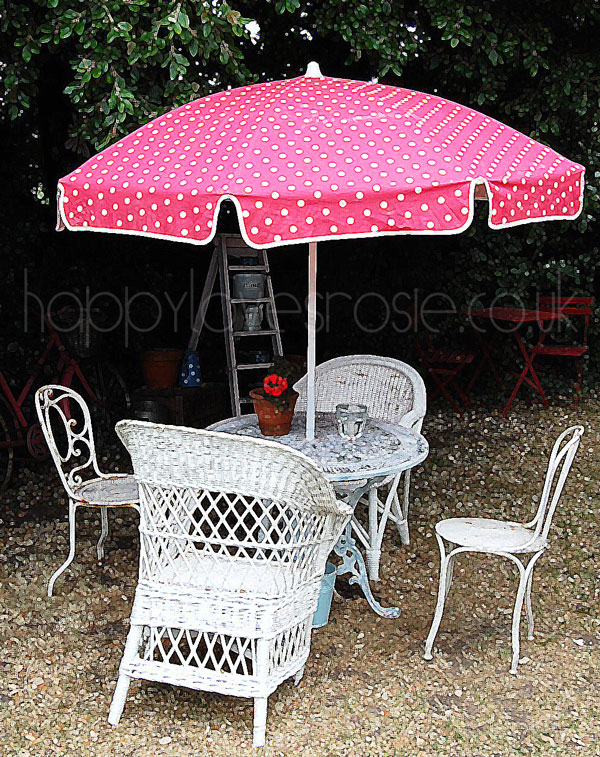 [Table and Chairs we left behind]

I had left a lot of my garden furniture at the other house as it was so exhausting moving everything else and I wasn’t in a very good frame of mind back then, stupid really! As It would of filled up my very bare plain oblong new garden a treat! If only I had that extra insight to see what a lovely addition it would of all of been, but my heart was just not in it at the time!

I knew that I had left my cast iron table and chairs there! Ok so they were mismatched, but I loved them anyway…So one day I decided to get up early and go on a mission around Medway to find me another set…I started out and drove to the first second hand shop I could think of, this shop has a garden section and to my surprise as soon as I arrived, they were putting out 3 aluminium chairs…ok so they were green, but nothing a lick of paint couldn’t sort out!I asked how much they were…£20.00 the shop assistant told me! Kerching! Sold! To Happy Harris!

[My plain oblong back garden]

I was so chuffed…I then went to a couple more charity shops and found nothing… but as I was leaving town, by coincidence, outside a house there was a pretty metal chair next to the bins…so I quickly swerved into a space outside the house and knocked on their door! An old lady answered and I explained to her that I was on a mission to find another chair to complete my set and if she would be willing to sell it!…(oh Yes, as my hubby will vouch…I can talk for England! lol!) to my surprise she told me that she was leaving it out for the rubbish men and that I could have it for free if I wanted it!…Bless her! I wanted to pay her some money for it, but she insisted that i would be doing her a favour if I just took it! So after a lot of thank you’s I put it into my car.

I just couldn’t believe my luck!Right so I now needed a table and I just couldn’t think where I could get one, I had exhausted all my haunts…so I rang Freddy to see whether he could suggest somewhere to me…

[After we bought the bargain plants]

What about that old reclamation yard in Rochester he said!  ***Light Bulb Moment*** lol! Oh Yes what about that place indeedy!…I remember them being quite dear in the past, but seeing as I had scouted around the area and it was getting to the end of the day and I didn’t want to go home without a table to [mis] match…I threw caution to the wind and decided to go…

[Overall view of the garden from upstairs not including patio]

The guy that owns the yard reminds me of an Eastender…full of cheek and banter…you know the sort I mean, someone you can have a laugh and a joke with!…I felt really comfortable talking to him and started to look round his yard…at the time I was interested in old doors and I started to look at those whilst he was looking to see if he had any metal tables…to my surprise he shouted over to me and said ‘this is the only one I have’ and as I looked over, there was my table to complete my set! Ok so it was very shabby and not very chic…a bit on the small side, the leg was a little crooked…but it was the end of the day and it would sooo complete my set! ‘How much’ I asked?


£30 he said…I just laughed at him and pointed out all its flaws and after a lot of chat and tongue in cheek comments we agreed on £15! Yay! I love a bit of bargaining! So there you go…I had my set! It’s amazing what you can find when you put your mind to it! I still can’t believe that I found it all in the same day either…it must have been karma lol! Freddy couldn’t believe it when I took it home… in fact the very next day he painted it for me! Job Done!

[Some of the bargain plants we purchased]

The pictures I have added in this post show my previous garden pieces that I left behind and my garden as it was last year…I also managed to buy lot of summer bedding plants at my local garden center [ Dobbies ] in the sale…I think all in all the RRP was £120 and we got them all for £20, you can see some of them planted down the left hand side in my garden [in the pics]…they also filled up a load of pots etc on the patio…

[Here is a picture of our patio last year]

[This is the other side of our patio behind the shed]

Bin days – free stuff outside peoples homes probably the night before it is collected…don’t forget to ask the homeowner if it is ok to take!