Phew I am so glad to get last week out of the way! Fred went away on business and left me and the kids at home (alone!)…and that was the start of the horrible weather, our summer has been attrocious hasn’t it…and last week just got worse and worse, we had terrible thunder and lightening…well I say terrible, maxie was NOT amused and spent most of the time in my lap, but where we live (by the water!) we get a lovely view from Gillingham to Hoo and the skyline was being lit up by all the lightening which was soo beautiful…I love this kinda thing to see the earth make electricity like that is sooo amazing I think…although my mum used to tell me and its something that I have passed onto my children…that it is God moving his furniture (aww sweet!)…so I have never really been scared of it…perhaps that is why I like moving my furniture and decorating!

Anyway, as I was saying…so we were having this terrible storm and I was working in my basement, when I started to get these terrible pains in my rib cage, they were really terrible….I was in agony and I couldn’t understand it as not so long ago, well about two years to be exact I had my gall bladder removed because of these such pains, but I was getting the same pain again – I was in real terrible pain I wanted to cry, I was having the cold sweats, the rib and back ache pain, the not knowing whether you want to go to the loo or not! sorry gals, but I was feeling so sick, I was thinking of calling the ambulance!…Rosie was at a friends house, Daz was at his friends house, I was home alone with only max for company….luckily I had a friend to talk too on the email, she knew my pain as she had had a gall bladder removed too, but felt hopeless, of course as she was in America….but it was lovely speaking with her…she kinda got me through it! and the pain subsided but it was so worrying as if I havn’t got a gall bladder…how the hell am I getting gall bladder pain again!

Now to add insult to injury!….Our Island has been in turmoil this week! for on the News it was reported that a pet Boa Constrictor (now who the hell would keep this creature as a pet! it beats me!) had got out of its cage and was on the loose on our Island…well this is not good news! no this is not good news at all, especially when you are suffering with phantom gall bladder pain and are making frequent trips to the loo!

I wanted to cry….I did!…for I had heard in the news that although it had just been fed, GREAT! these snakes were also good swimmers! so are you thinking what I am thinking!….HELP! read this report in the Telegraph! to find out more! 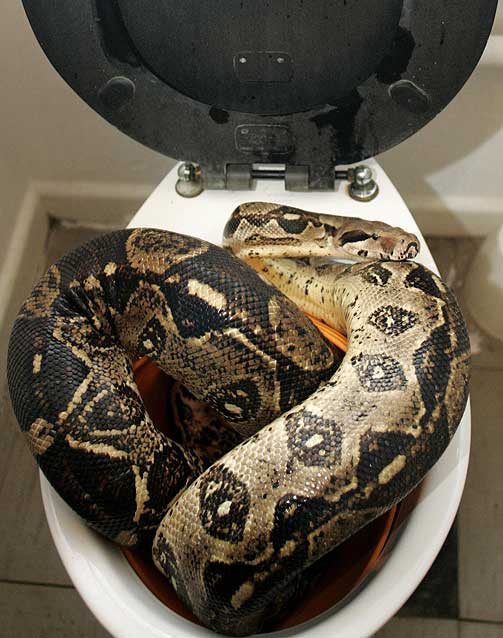 I am hoping that all this is not just a publicity stunt by this Mckenzie guy, as the last paragraph surprised me a little!“McKenzie, 22, was eliminated in the third week of the third series of the ITV show, which was eventually won by Brit School student Leona Lewis. He is due to release an album shortly.”At first I thought…what the HELL are you reporting about that for…get on with the news,about HAVE YOU FOUND THAT ROTTEN SNAKE YET! not being able to open windows and treading carefully when walking the dog is not very nice!…infact terrifying!…you just keep imagining it to leap out at you from behind a bush or something…you know, in your mind you are thinking that you will be on the headlines of the news….woman squeezed to death by Boa…..we’ll if the Boa doesnt kill me the rotten phantom gall bladder pain will!…and a £500.00 reward! no thankyou! if I see it mate, ill be running very fast in the opposite direction I can tell you that for nothing silly guy £500.00 reward!…Tut Tut!The new English X factor is starting next week…I think I might of actually believed there is a snake loose on this island…but don’t you think that is a bit of a coincidence!…I don’t know – what some people would do for publicity! what do you think!Oh and please help me on the gall bladder pain thingy – have any of you got the bad pain after the gall bladder removal….I went to the doctors the other day and he said avoid spicy things…well I know to do that already, but he also said that, when they cut the gall bladder off it leaves a little stump…and some food can get trapped in this little stump and it is that that causes this same pain!…have any of you had the same experience…it would be great to chat and pass on notes!Bye for now – hope I havn’t bored you all too much!…better get off to bed…its very late…speak to you all soon….luv Happy xx