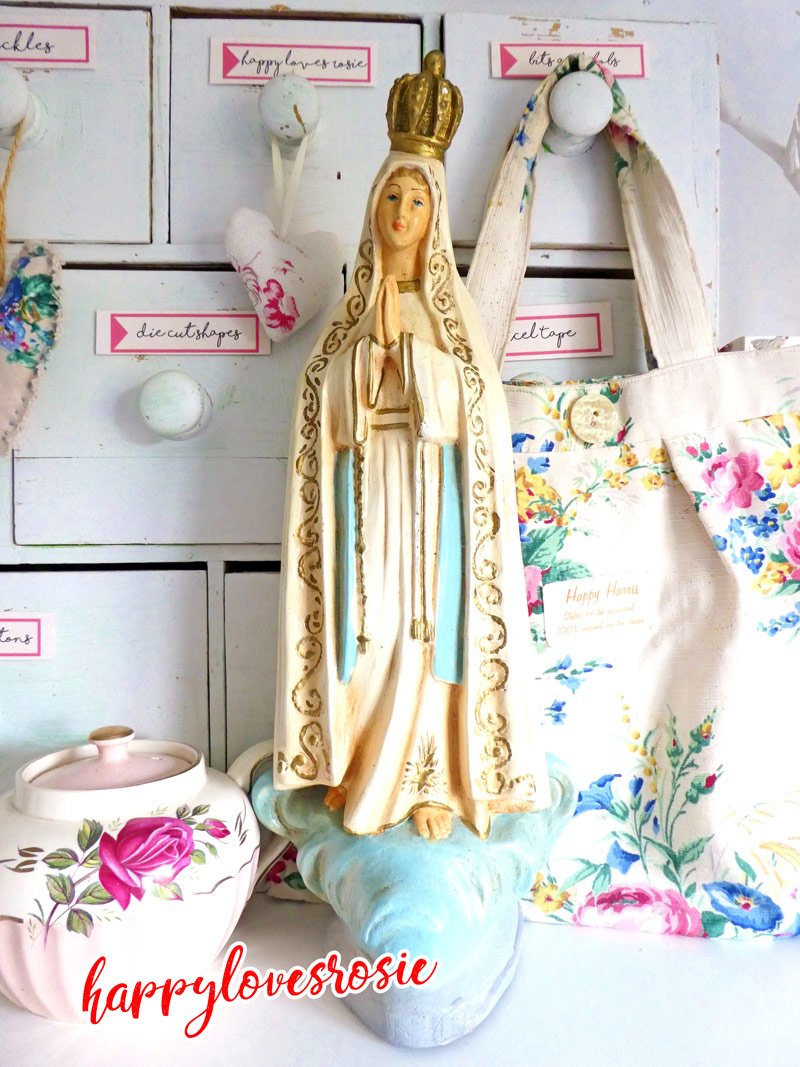 I thought I owed you a ‘Happy New Finds’ post as I haven’t done one in such a long time and I have been filling the house up with some lovely pieces…
After the move and the deciding to chuck out all my chintz, because we are now living in a modern house and getting ‘rid’ of Red!  I have now decided the kind of style that I like and it is not that much removed from what I have always loved! 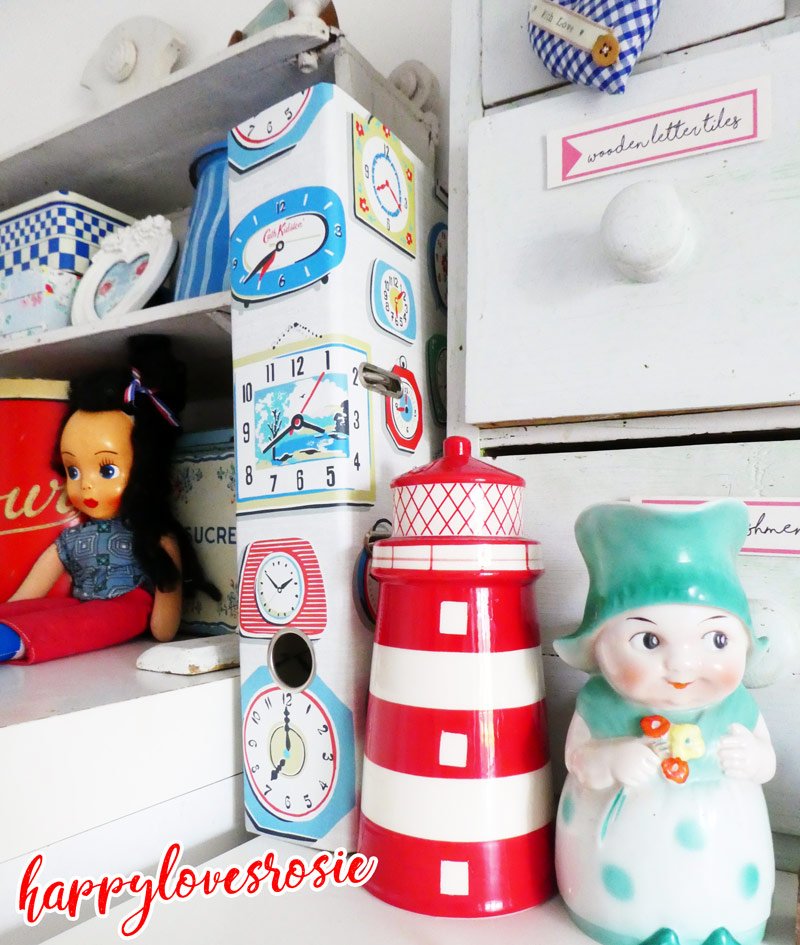 I bought the lighthouse in a little gift shop in Herne Bay.

But now I like to add in a bit of ‘Modern’ infact anything that pleases me or gives me a chuckle when I am out and about.  We have visited a few destinations over the Summer and I have bought quite a few interesting pieces…I have decided not to go to the Bootfair so much this year too, as I found I was wasting money and clutering the house too much. 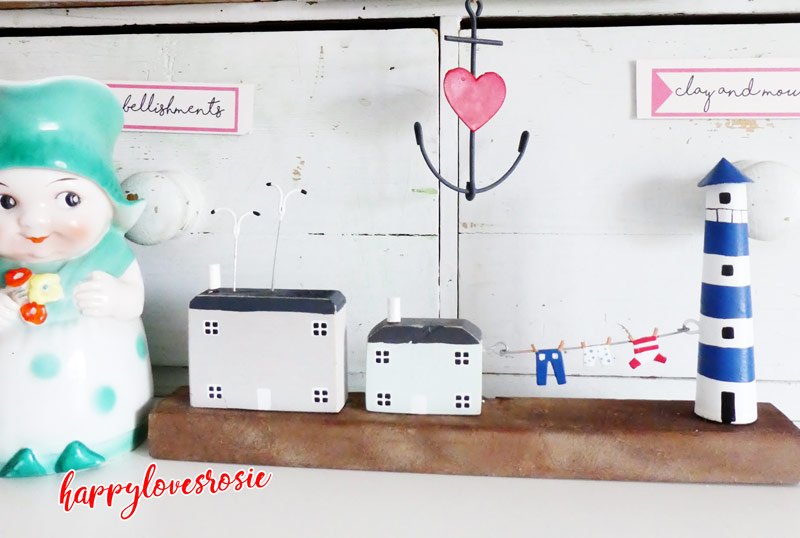 We needed a holiday, so rather than waste the money on ‘stuff’ we saved up to go to Suffolk and stayed in Centre Parcs there, where Freddy was able to go swimming for the first time since he had his accident and is confined to his wheelchair!  The holiday was lovely and we both felt so well rested, we didn’t want to come home! 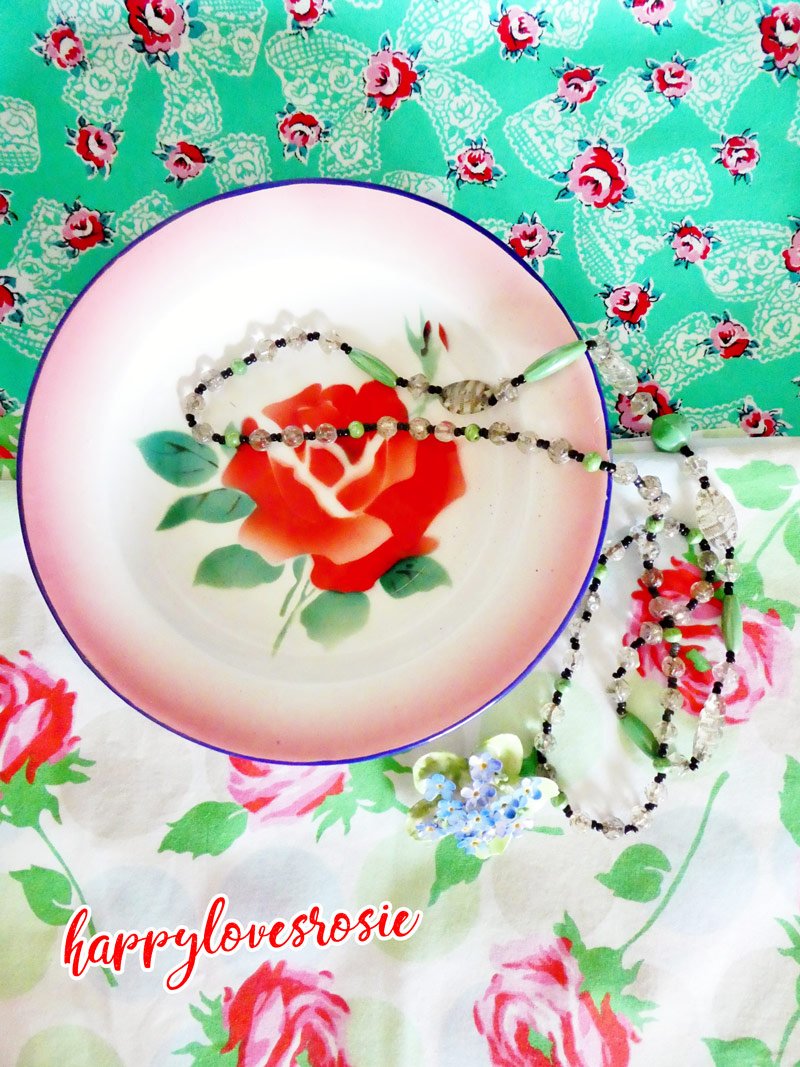 The above cath kidston rose print material, I purchased from Ebay…

it’s an old shower curtain, I paid £18 for it, but I had been looking for it for ages and was so happy that I finally found it!

Also because we weren’t wasting money at the weekend, we were able to go on days out, which have included trips to the coast, which has  been lovely this Summer as we have had such beautiful weather…A lot of the shops, Freddy is unable to get into, because they are old buildings and often have steps, but the shop owners have been so lovely and allow me to take pictures of things that I think he will like…and some even take things out to show him, once they know what his taste is…we have bought many a thing together like this! 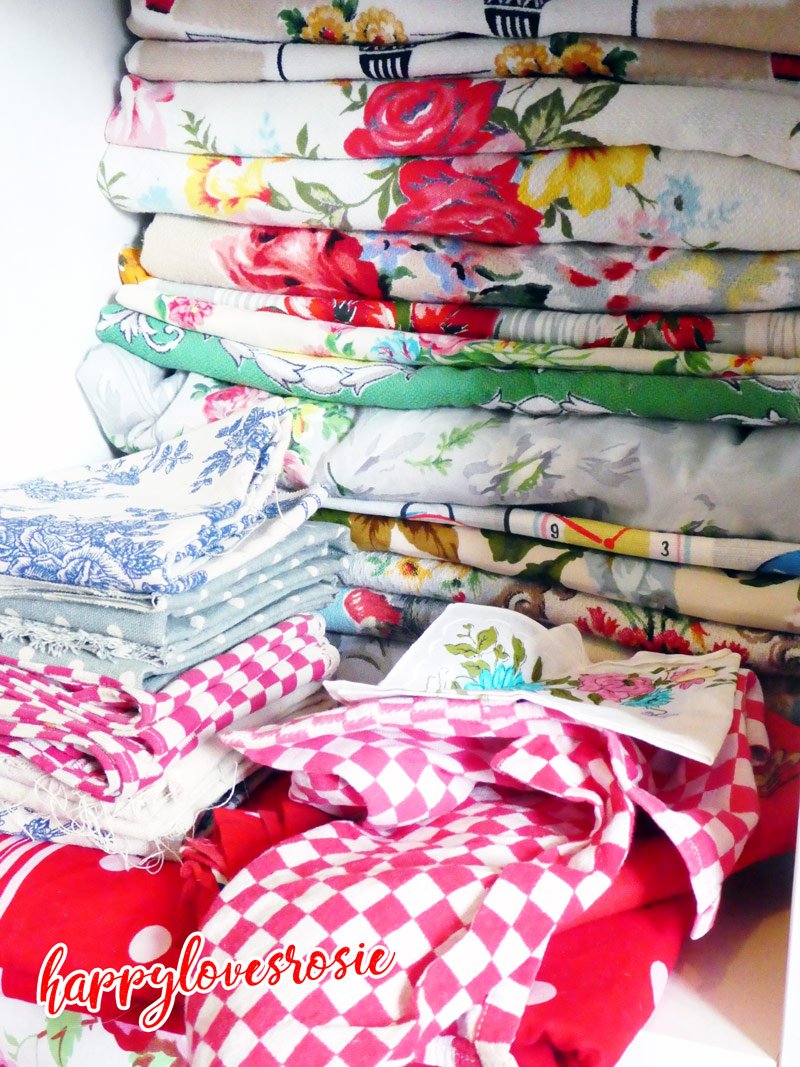 I have also added to my material stash…there is a lovely material and craft shop in Rochester called ‘HomeTown‘ when you go in, you want to buy it all! Everything in there is displayed so well.  They stock so many 1940’s 1950’s style fabrics that it would just be too rude not to buy something from there!..and I have, many times! 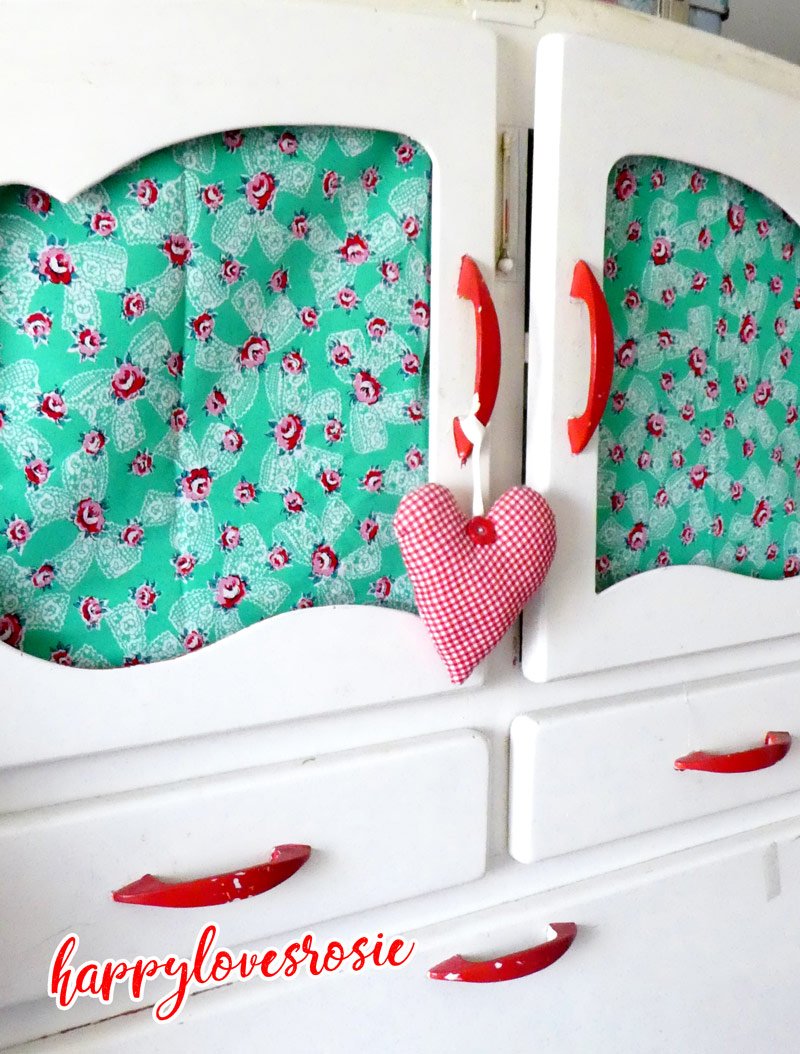 Like the above material…that I have added to my 1940’s kitchen larder unit…which looks so Pretty! 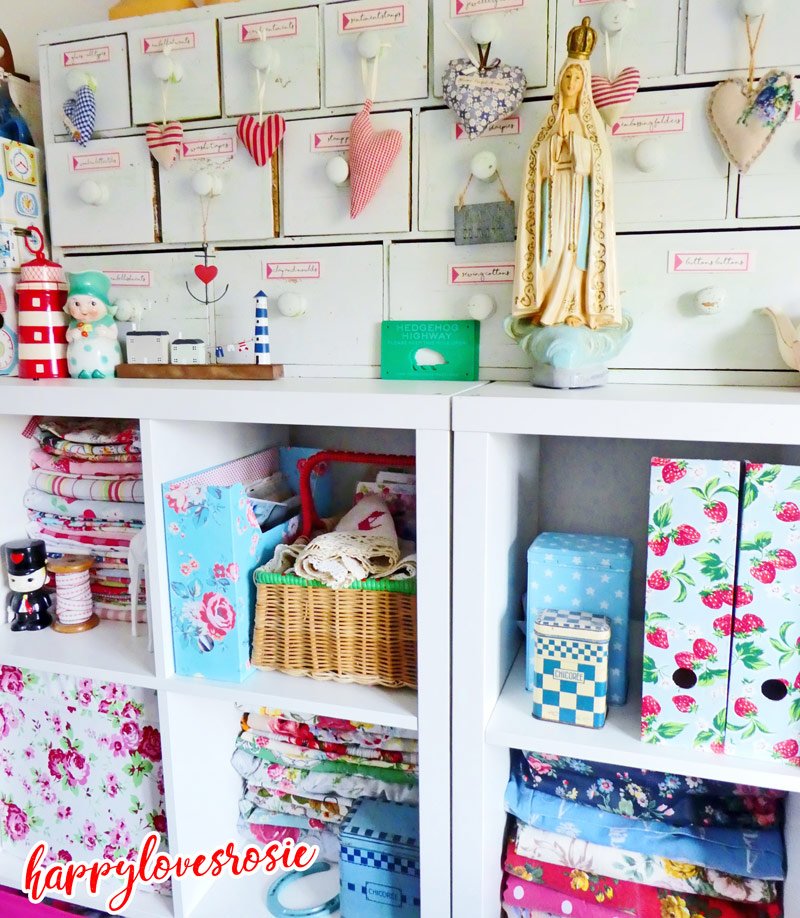 I have also picked up this beautiful Madonna (first picture and above) she was a steal at £20 on the coast road to Herne Bay.  She is made of chalk and I have always wanted to own one, but have never found one that I really liked.  But when I entered the shop she was staring right at me and I knew then that I would buy her no matter what the price! 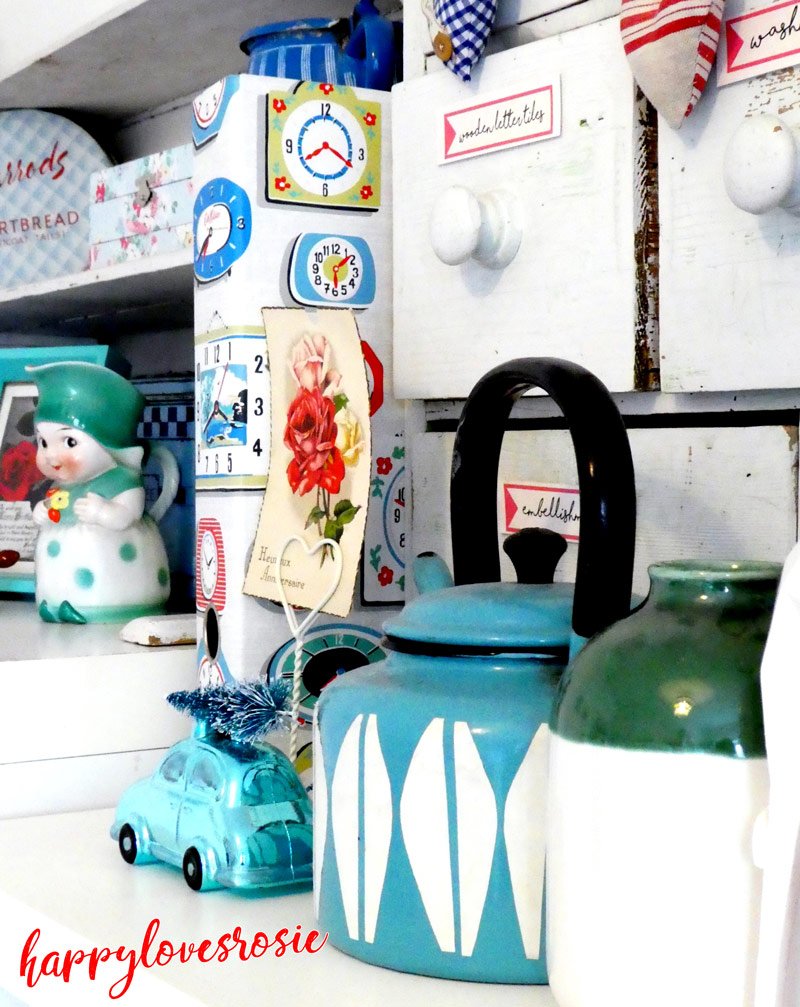 The craft room tends to hold all my quirky bits and pieces, that I know if I put into the main house, they would be put in the nearest draw!
As Freddy and I have got older both our tastes have changed, he likes more old wood and dolls heads (EeK! Strange!) and I like pretty and whimsy!
But you have to compromise don’t you (Do you??!!? lol!) 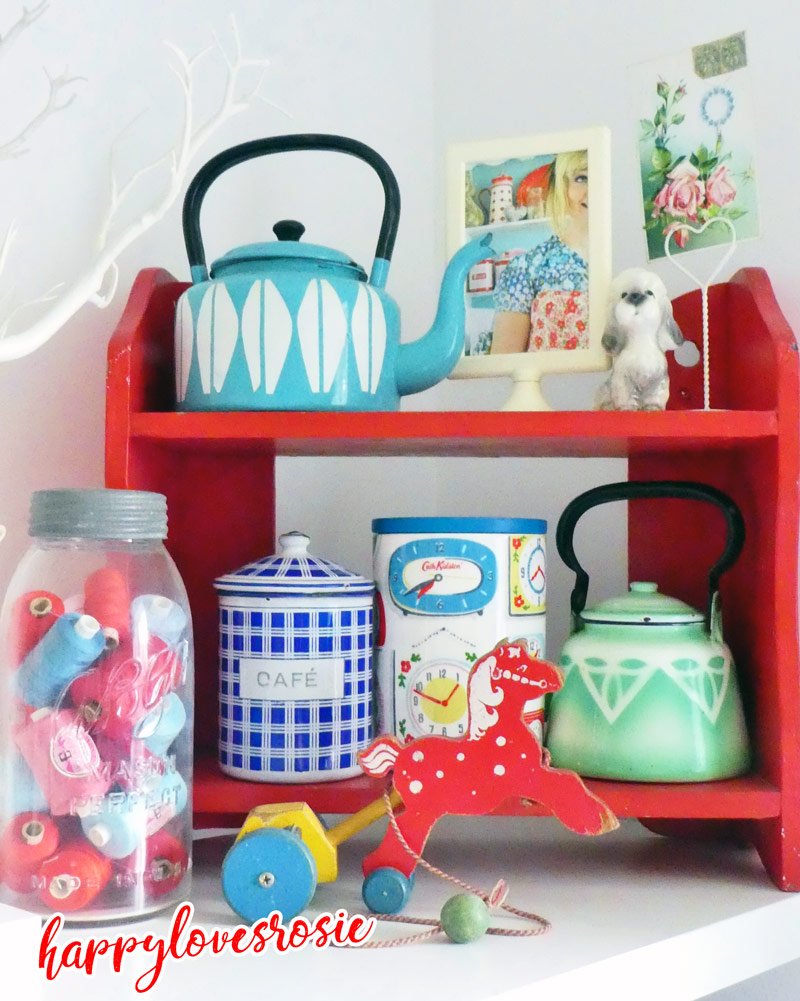 I have loads of new pictures of how we have decorated the house to show you, so please watch this space!
What new things have you bought lately?

Bye for Now my Lovelies x