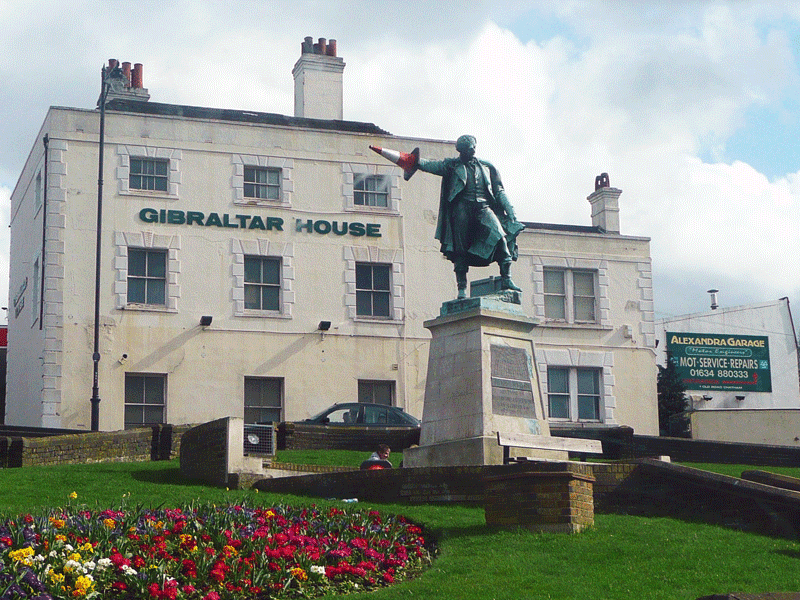 I was driving along Railway Street, Chatham today…when I saw that someone had put this traffic cone on this statue yet again! (unfortunately its a regular occurance!)…I was sitting in the traffic and thought I should find out about this man!…and why he was there! not originally from Medway, I sometimes have to look things up….

If you know Chatham, you know him. Yes you do. He’s the statue in Railway Street. Just below the station. Points to the old gent’s lavatories. Usually wears a no-waiting cone on his head.

Got him? Right. Any idea what he did?
And why his statue is in Chatham? Read on.

Waghorn was a postal pioneer who shortened the overland route between England and India from three months to between 35 and 45 days. And why was that so important? Because, simply, time is money: Faster mail meant quicker and more competitive business.

He was a business hero who probably didn’t get the recognition he deserved — until his statue went up in Railway Street in 1888. Waghorn’s route shortened to the distance to India from 16,000 miles via the Cape of Good Hope, to 6,000 miles.

I am particularly pleased to mention Waghorn because his family came from Snodland — Medway’s equivalent to the “name one famous Belgian” joke.

Thomas was born in Chatham in 1800 and baptised atSt Mary’s Church on 16 July. His father, also Thomas, was a butcher and had married Ann Goodhugh at All Saints’ Church, Snodland, on 28 July, 1794.

Thomas entered the Royal Navy at Chatham, joining HMS Bahama as a midshipman in November, 1812, and married Elizabeth Bartlett at St John’s Cathedral, Calcutta, in 1822. He became a pilot and took an interest in the early attempts at establishing a steamship route from England to India and the East. But the East India Company — which effectively ran that part of the sub-continent for Britain — showed a remarkable indifference to his ideas.

After leaving the Navy as a lieutenant in 1832 he made the journey to India via Egypt as an experiment to send mail. Disastrously, the journey took four and a half months — but on his way back he met the Pasha of Egypt, who supported his desert route idea.

Personal tragedy followed in March, 1834 when his wife died in Calcutta. By December, however, Waghorn had remarried — to Harriet Martin, daughter of the miller at Snodland and a neighbour of his mother. That month he also inherited a substantial estate from his grandfather and the couple lived in Rochester until building The Lodge in the upper High Street at Snodland about 1841.

Waghorn’s business plan began to flourish and he set up an agency in Cornhill, London, for conveying post — and passengers — to India via Egypt. Between 1835 and 1837 he lived among Arabs in the desert and laid the foundations for the overland route across the desert from Cairo to Suez. This involved building rest-houses and supplying guides, boats, horses and carriages for travellers.

He became deputy consul in Egypt in 1837, but soon fell out with the authorities. From 1840, the Peninsular and Oriental Steam Navigation Company (P&O) set up in competition with him, backed by the British government. The came another setback: 300 horses died in a plague. It was the end — and the Pasha bought him out.

Waghorn turned his attention to speeding the post in Europe, through the new railway system. He was successful, but the Government reneged on a deal to pay his expenses for the trials left him £5,000 in debt.

Waghorn died at his London home in Islington on 7 January, 1850. He was buried at All Saints’, Snodland, just outside the vestry door (pictured above). The south wall of the nave bears a memorial to him.

Perhaps, as a mark of respect, Chatham’s yobs might stop crowning this great pioneer with road cones.

So perhaps if the ‘YOBS’ of today…took the time in finding out about our great heritage here in Medway…they might actually think! before they do this kinda thing…

Well thats the bee in my bonnet got rid of this week 🙂 and a little history to boot! not bad eh! and we are only in Tuesday! LOL