Fred and I have recently had a bit of an argument over our blogs – you see up until now we have both not really minded what each other had written about…..it seemed Fred likes to write about the house and I get everything that is left….which I have not minded because my life revolves around my family, so I am quite happy to let you in on our lives….well up until now!! You see we have just recently come back from a large town boot fair in France, buying up our old favourite ‘french enamel’ together! OK so we were spending Fred’s birthday money….he received quite a bit from an old aunt that he hadn’t seen in years….I wish I had an old aunt like that! (I’ll have to start tracing the family tree!)

So we decided to invest it in some old french antiques….or more I should say ‘shabby chicness’ for our home…and do you know what! before I had even unpacked the cases (OK I did sit down and have a nap!)….HE had arranged everything where HE decided to place it all and took pictures of it and had done a blog before I had even woken up!!!!!! MON DEIU!!!…..I can hear all you fellow bloggers gasping!….I was absolutely DISGUSTED….No discussion about who was going to have each picture….no sharing of items that we had chosen….No nothing…..I SULKED….AND SULKED SOME MORE…..How devious!….In fact I almost took his name of the side of my blog – yes it was as bad as that!…..and look what he thought I could take pictures of….he left me this little lot while I was asleep! 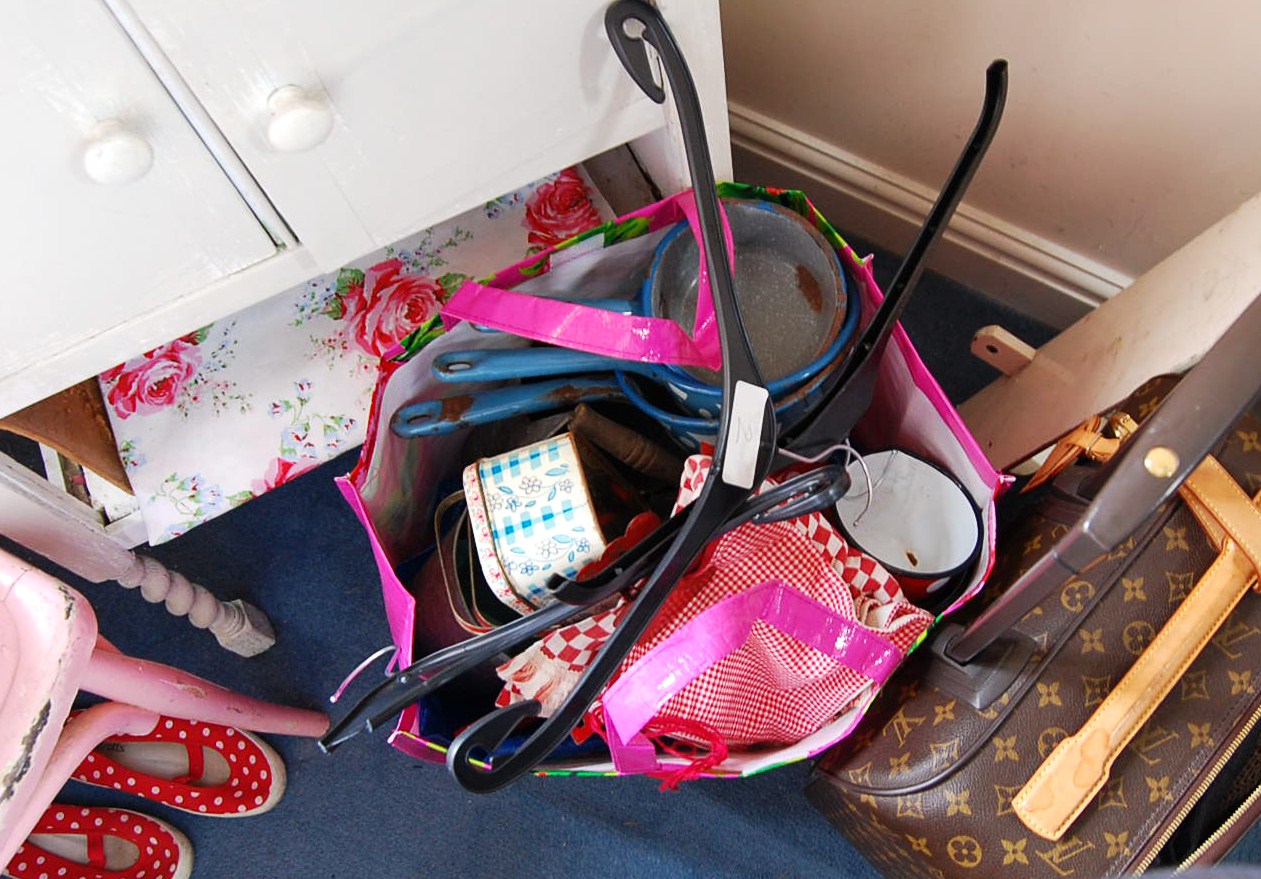 Well just as WORLD WAR 4 was going to break out…he removed his blog, so if some of you saw it first and then see it was removed – you were not going mad – I WAS!….anyway after I calmed down we decided to share the pictures and he apologised to being GREEDY and said that he wouldn’t do it again….ahhh bless him! I went round the house taking my pics and some of the pics are the same but some are different…so if we have overlapped here I am very sorry – Oh and by the way, if you ever see ‘Fredsworld‘ disappeared from the side of my blog – you know we are not speaking! LOL :0) xx 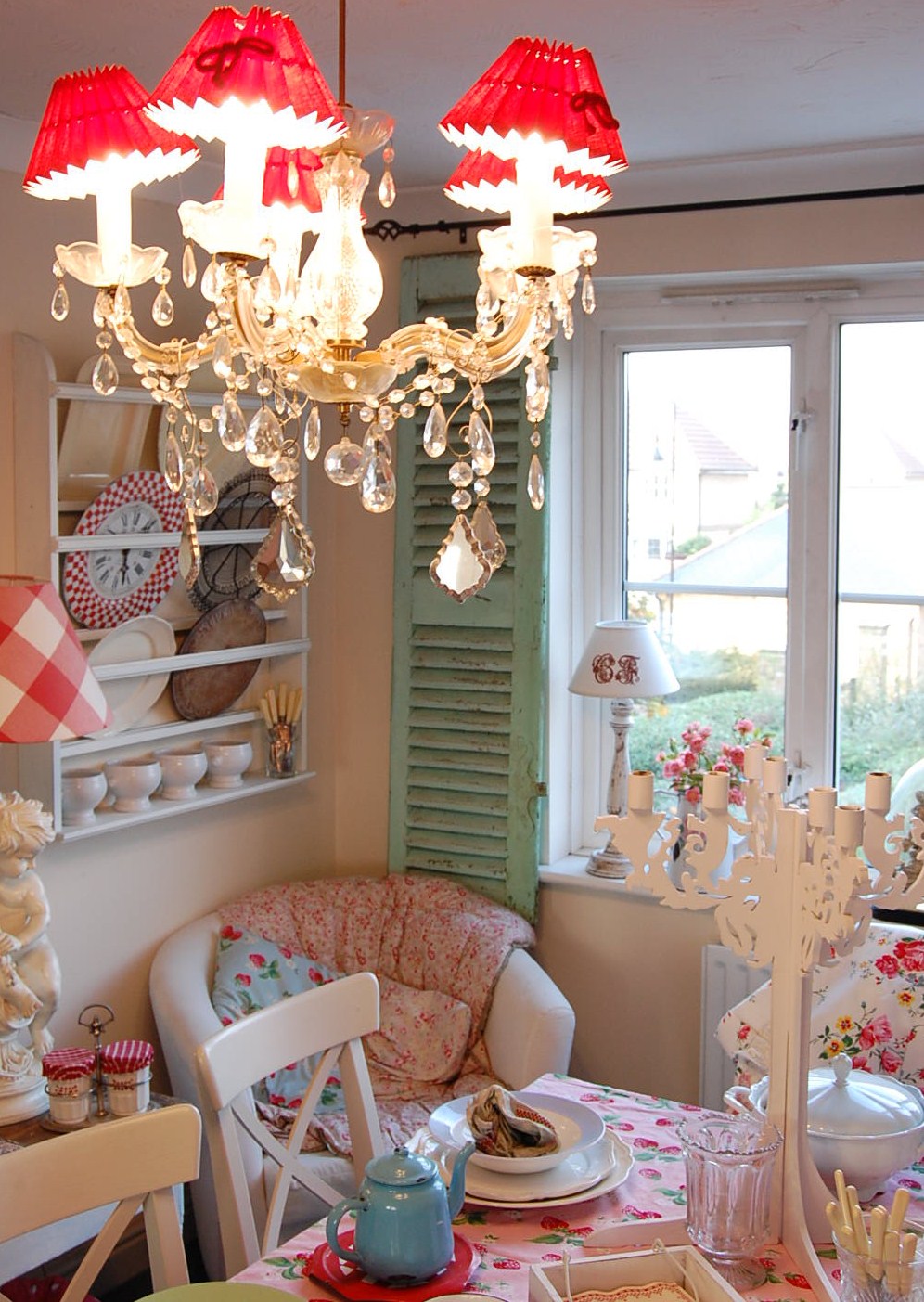 In the picture above we purchased those green shutters – yes there is one on the opposite side to, they match the dining room beautifully and have plenty of paint falling off….Just perfect! 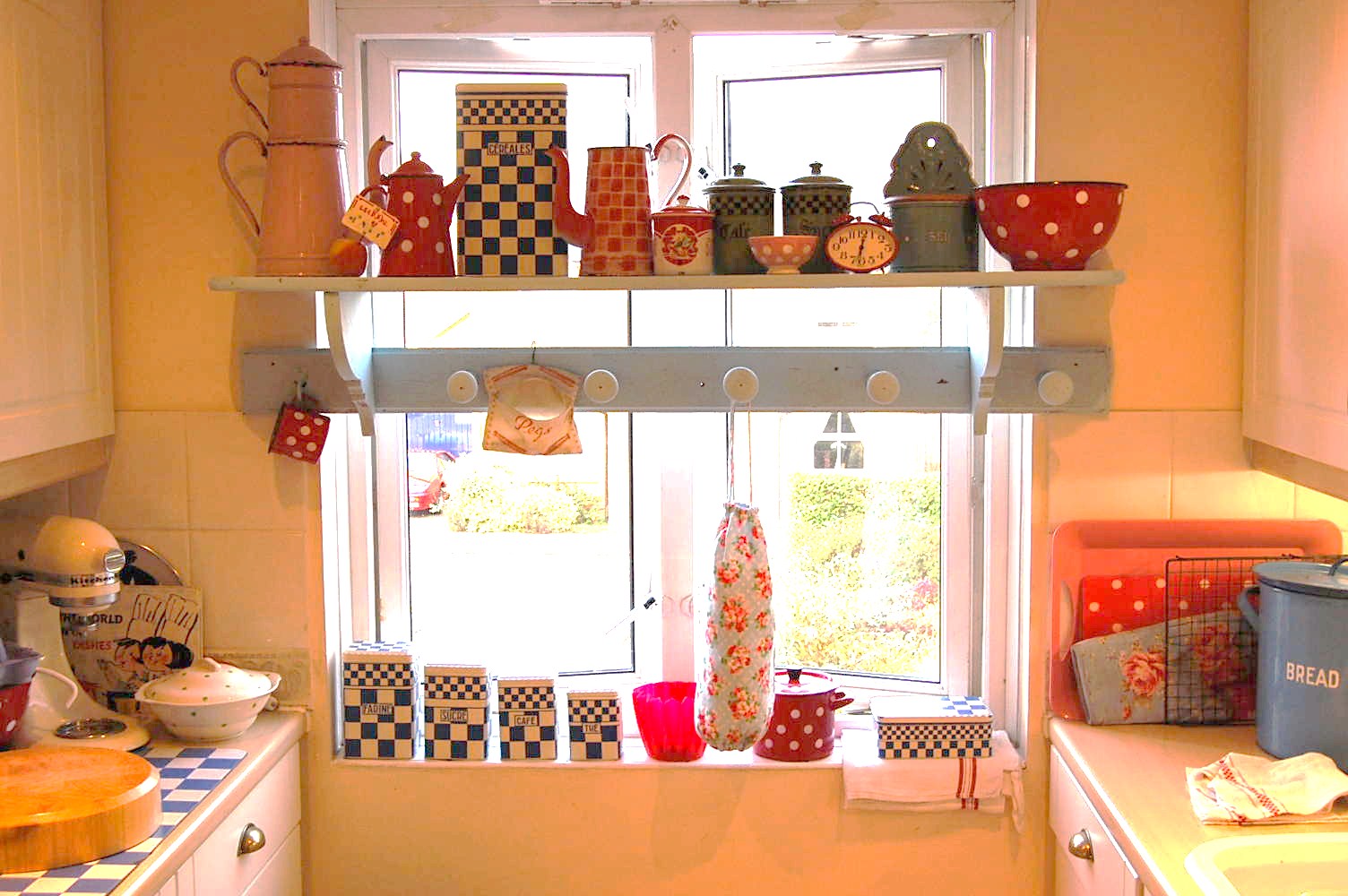 The pic above shows our rather small galley kitchen…it is on the first floor as is our living room and dining room – as we have views over the water….so it is rather scrummy….so we purchased the shelf and most of the ornaments on it and indeed below it on the mantle piece, Fred had the rather great idea of putting the shelf along the window, as we do feel rather ‘on show’ in there sometimes being opposite a cottage….so the shelf adds a little privacy and a talking point! 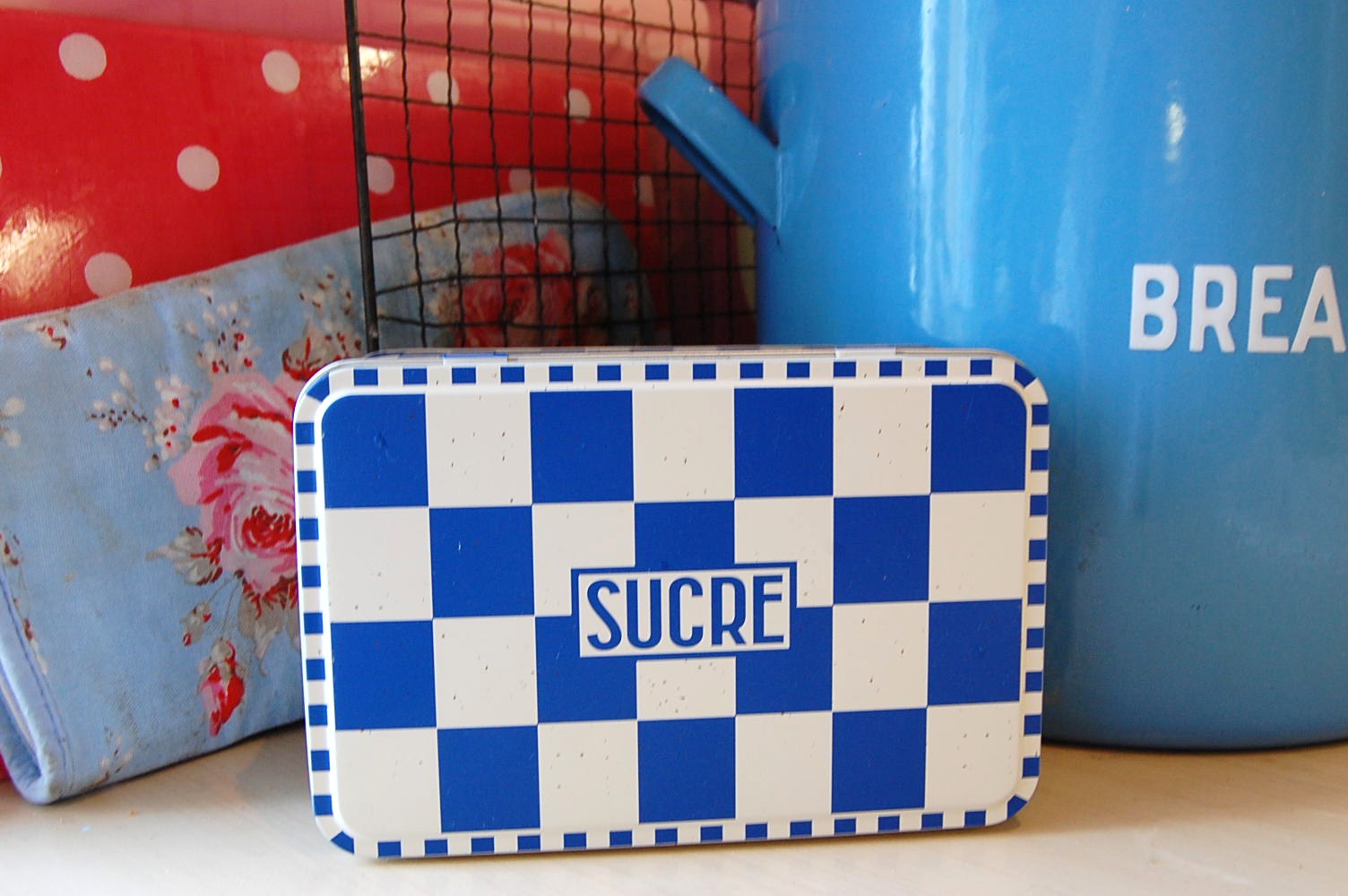 A close up of a Yummy tin – that I had to have! 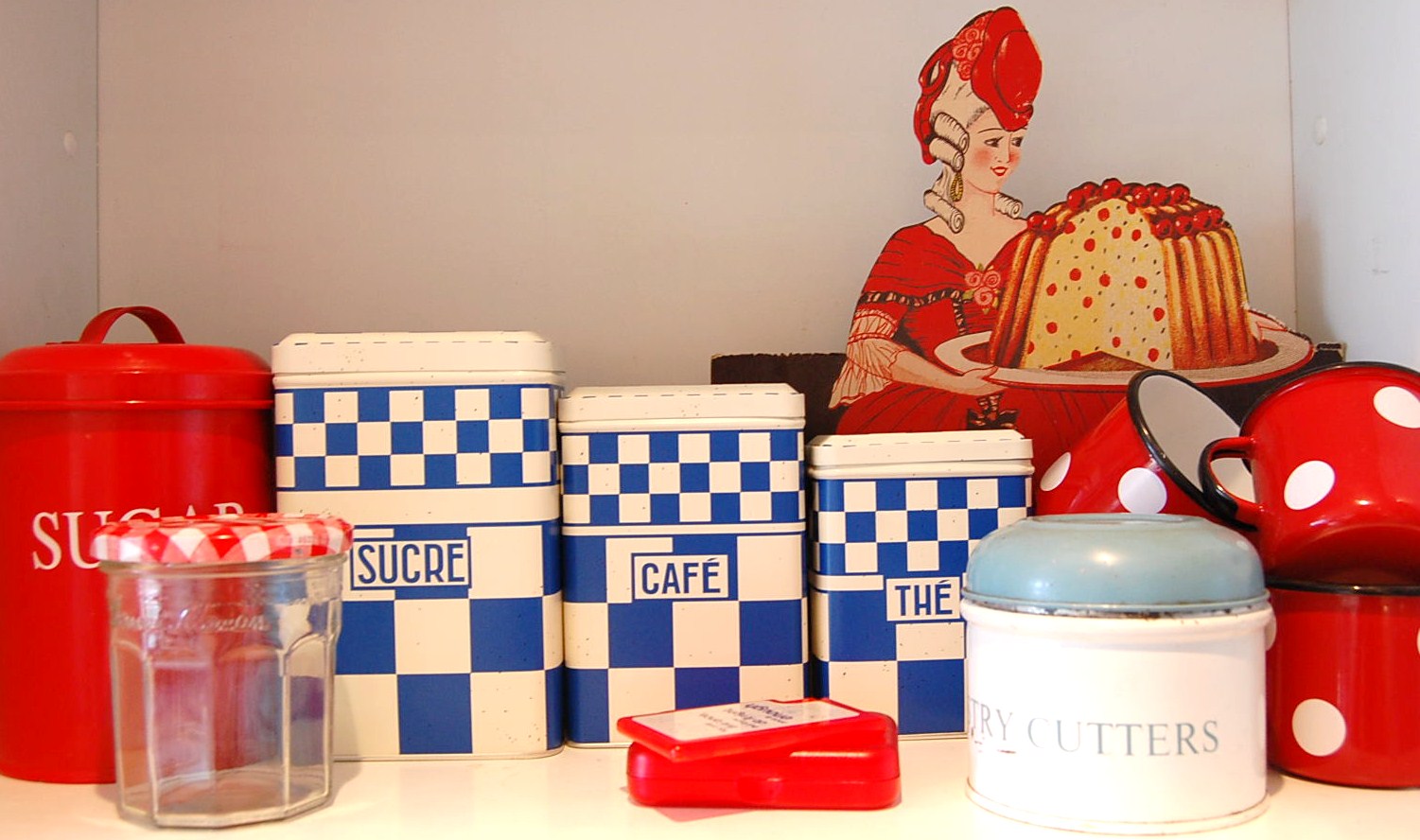 …and here we have their matching brothers and sisters….and we are actually using them, which is great….although the ‘THE’ which means Tea is rather on the small side and you can only fit about fifteen squashed teabags inside this small tin…..I suppose they used to use real tea leaves…..but I am still going to use it as I love this set so much… 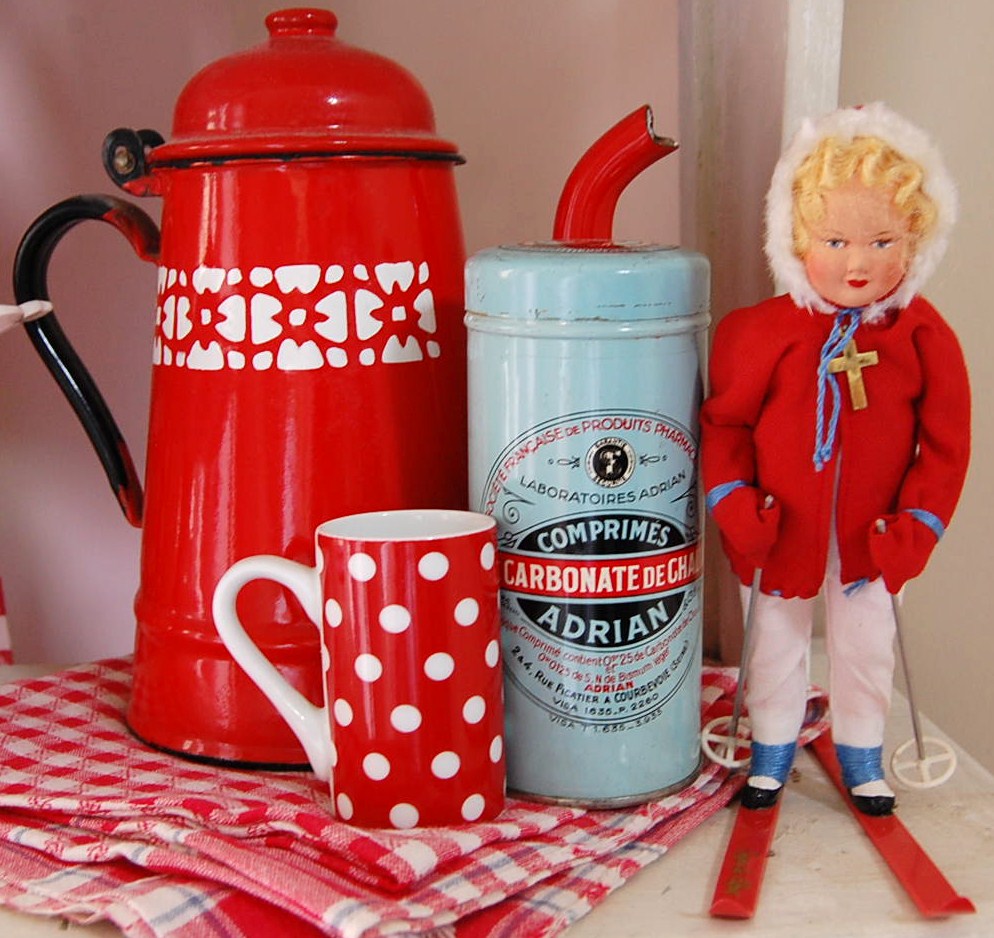 ..and would you look at this little lovely! Fred bought this little doll for me, isn’t she pretty! and on ski’s something which you will never find me doing! I have two left feet!…..Her hair colours nearly the same as mine this week – yes I am 41, but still having bad hair days – but I have actually paid to have it done professionally badly this time!….when I could of easily mucked it up myself for a 10Th of the price….will I ever learn! 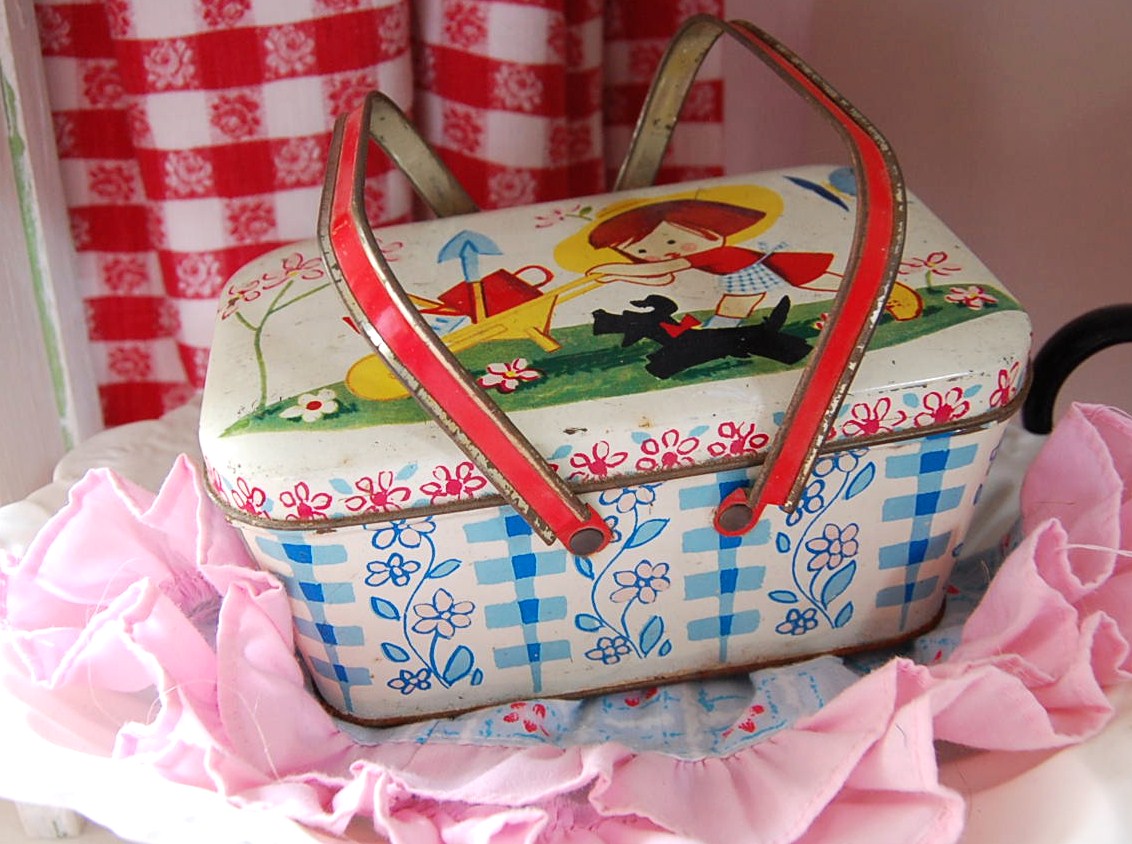 We bought this lovely Madeleine sweet tin too – isn’t it lovely, OH and also the pretty little dress underneath….sooooo sweet! 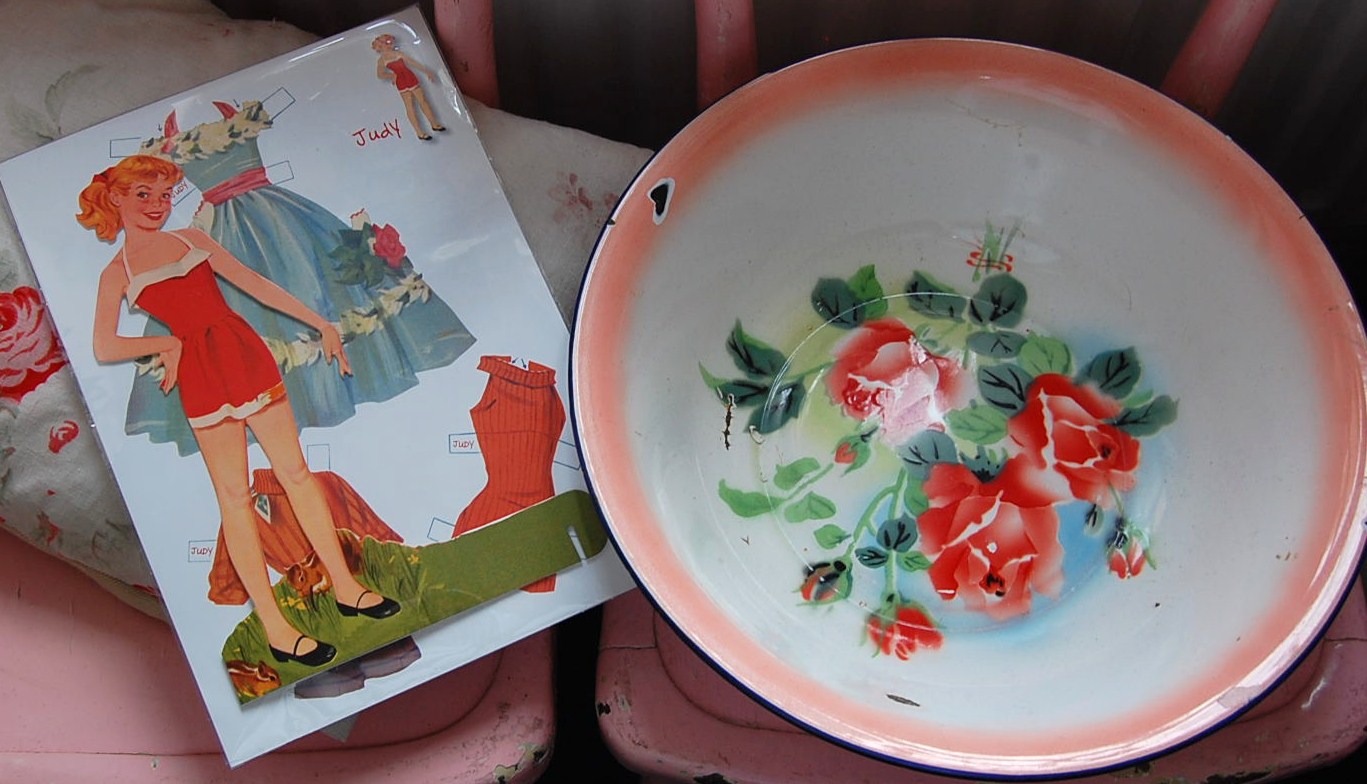 …Fred spotted this lovely cutout 1950’s paper doll….do you think he’s telling me something! and its lying next to another pretty flower enamel bowl – I love them….I just can’t get enough of them – I think I have quite a few in my collection now and apparently its the floral bowls that are becoming more collectable, because there are so many copies made now of the spotty and the check bowls and tins.

So there you have it….of course we bought other antiquities….I bought many french postcards….so I will be showing them to you soon – so keep watching – I just wanted to post to you all some lovely eye candy asap!

As you can see from this post…I wrote it back in 2007, nearly 16 years ago and I must say that my taste hasn’t changed much…But there have been a few times where Fred wanted to decorate a bit more modern [I wasn’t happy with that as i still love the Happy Shabby look!] I always joke that he likes brown and taxidermi [Yuk] and I like bright colours and whimsy decor as always… but as we have got older, I do find myself questioning some of the things that he buys! Still if it makes him happy that’s fine with me [and as long as he puts it in his craft room out of the way LOL!]

Freddy now has a craft room of his own and he has decorated it with lots of brown things lol! the rest of the house is decorated with lots of colour and pretty stuff, but I haven’t blogged about our forever home for quite sometime now as there has been so much going on my end.  I still have my craft room its much smaller than his but it keeps me sane and I must admit that I haven’t been doing much crafting either…I do need to make myself some eccentric jewellery for a Special occassion coming up but I don’t know whether I will get around to it…but watch this space.

Bye for now my lovelies x